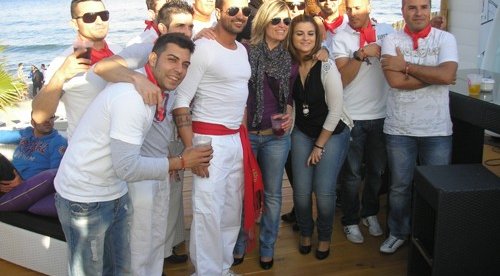 The ‘San Fermines,’ from Alicante said that Mojacar is a cool place with no trouble.

FEARS by local residents, that thousands of scandalous youths would descend upon Mojacar and wreak havoc at the Spring Break (MSB), parties appear to be unfounded.

Four different police officers questioned at different times during the weekend said that the situation was calm and that the young people had been behaving well.

The organisers said that more than 1500 people, mostly university students and stag-hen groups, came to Mojacar from April 12 to 14 for the MSB holiday weekend.

Fears of possible unrest were heightened because of recent troubles at a festival on the Costa Dorada. News reports highlighted drunken, ‘half-naked,’ British university students at the Saloufest vandalising property, being arrested and getting injured.

However, according to more than ten different sources, their Spanish counterparts behaved surprisingly well in Mojacar.

A week before MSB, she reminded the press, that the town hall had nothing to do with the parties, and that police presence would be high.

At 1am on Saturday April 14, there were ten police vehicles on the seafront between the Pueblo Indalo and Parador Hotels.

Local police checked cars and monitored groups of young people walking to and from bars. “The streets seem busier than usual for the low-season, but it’s fine and there’s a good atmosphere,” said fifty two year old Manolo Torres of Mojacar Playa.

This is the first year that spring break parties (famous in Ibiza and Mallorca), have been held in Mojacar.

The internationally renowned DJ, hosting the Maui Beach party on Saturday afternoon, Luis Lopez, said that Mojacar was a beautiful venue with a great atmosphere.

Kiko and Luis Rubio, who have owned Maui Beach for ten years, said that the MSB was a wonderful initiative because it was held at a time of year when many bars are usually empty.

DJ Moree MK said that the Maui Beach hit song and video seen online almost five million times, “Mujeres, mojitos, Mojacar (MMM),” had attracted people to Mojacar from all over Spain and that this was amazing for tourism.

The urban musician Dakaneh, who wrote and sung the chart-topping MMM also made a guest appearance at MSB.

The Rubio brothers said that they had employed 18 full-time workers last year and hope to take on even more this season.

They said that they always have tight security, but that the party-goers had not caused any trouble.

A travel agency in Elche organised the MSB.

They sold package deals, mostly to students in Murcia and Alicante for the university spring term holiday.

Sports activities, tours and all-night parties were included in the packages, along with accommodation.

One of the organisers, Fran Garcia said that no meals were included in the deals, so clients had definitely been spending money in Mojacar establishments.

Marco and Paolo of the Pizzeria Biancorossi on the playa, confirmed that the MSB was great for business, and that Friday night had been as busy as Easter week.

They said that they were pro-fiesta as long as things were kept under control.

Garcia said that the organisers had contracted ten buses through a local company, to transport clients to and from parties, to prevent drink-driving.

He said that about €10,000 of the MSB budget had been used for private security at the hotels and apartments, and that there had been no disturbances.

The 1500 packages sold out a month before the event, even though Mojacar town hall had been against the MSB from the beginning, he said.

He claimed the organisers had cooperated with the mayor, removing a publicity video with images of Mojacar’s tourist sites from the MSB website, at the town hall’s request.

He said that he hoped that the mayor would now wonder what all the fuss had been about.

Amalia and Alberto Gonzalez of the Estanco El Cantal (tobacconists) in Mojacar Playa said that the shop had been a little busier than usual, during MSB.

Thirty-two-year old Amalia, said she was happy to see extra police on duty, and that she hadn’t heard of any problems.

She said that as long as people were respectful and didn’t damage public property then parties were okay.

However, she said she didn’t think that small local businesses had benefitted much, because young people on tight budgets tend to shop mostly in large supermarkets.

Alberto, aged 27, said that one Mojacar Playa neighbour complained about early morning noise when party-goers had returned at 7am, but that he hadn’t heard of any real trouble.

Almeria Angels employee, Alba, who has lived in Mojacar for ten years, was on night shift at the AA office near some of the party venues.

She said that she was pleased about the police presence, and that the town hall had obviously meant what they’d said about preventing problems.

Party-goer Arancha Fernandez of Valdepenas Castilla de la Mancha, said that she loves Mojacar and visits every year, but like anywhere else, there are always people that can’t hold their drink.

On Friday night, police had thrown some MSB guests out of the Pueblo Indalo hotel where Fernandez was staying with her friends, she said, because they had, ‘smashed up,’ a room.

Organiser, Fran Garcia, denied this, saying that nothing had been broken.

He said that Police had asked the guests to keep the noise down, that they had complied and, ‘that was it’.

More than 600 people attended the party at the Mandala Disco on Thursday, and more than 1000 on Friday.

Mandala public relations officer, Rosa Garcia said that figures were double those of normal Thursdays and Fridays at this time of the year.

Garcia said that she thought the extra police presence
was a good preventative measure but that there had been no disturbances.

She said that she understands the town hall wanting to promote family tourism but that because of the recession, fewer families are coming to Mojacar.

She said that MSB was good for the town because it had brought many young people to Mojacar for the first time and that they would likely return in the summer and for future holidays.

Warning signs in the Mandala car park tell people not to drink outside, and Garcia said that the police are always quick to fine people for, ‘botellon,’ street-drinking.

Maui Beach, Mandala and the MSB organisers said that they thought it was possible and desirable for both family-tourism and party-tourism to co-exist in Mojacar. They said that it was impossible for the local economy to survive purely on family-tourism.