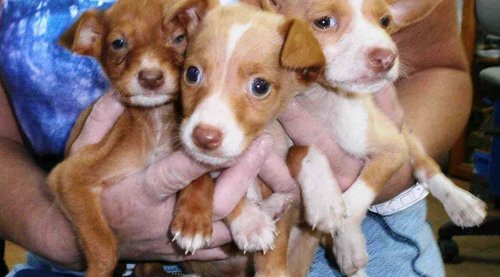 AS Yvonne, one of the PAWS shelter managers, remarked wearily on a recent Friday: “What a ‘good’ week for Paws – NOT!” Within four days there had been three separate dumpings of puppies at the shelter.

The first two were simply thrown over the high fence which surrounds the premises.

They were found the next morning, apparently in good health and none the worse for their ordeal. The following night three more were dumped in a box by the shelter gate.

Tiny, extremely dehydrated and starving, the young caravan volunteer who found and took them in feared that the smallest wouldn’t even make it through the night. So she stayed up and nursed him. Mercifully all three are now making good progress. But the third case stopped us in our tracks.

The dog, whom we’ve named Tessie, was left overnight in a box.

Staff who found her had real difficulty coaxing her out – and then discovered she had a severe hip injury.

A proper veterinary inspection and X-ray revealed a horrifying history of cruelty. She had extensive pelvic fractures, was riddled with shotgun pellets and appeared to have been run over.

As Didi, our animal behaviour specialist, exclaimed: “Not only did someone use her for target practice, but she’s also been treated as nothing more than roadkill.”

Extensive surgery and hospital recuperation would cost around €5,000, which PAWS simply doesn’t have.

So she is undergoing a month’s immobilisation in special foster care and with supervision from our vet, who is hopeful the fractures may heal enough to allow her to walk reasonably well again.

And the most astonishing thing of all is that Tessie is affectionate and responsive to anyone who approaches her.

She simply doesn’t seem to bear a grudge.

All of us who work in animal rescue are asked at one time or another – Why? Why spend all that money, time, energy and effort on a bunch of dumb animals?

My own answer has always been very simple, and it is shared by many of my friends and colleagues. It makes me a better person.

There is a huge volume of evidence of the value animals can be in our society: we use guide dogs, hearing dogs, rescue dogs, sniffer dogs, watch dogs and guard dogs.

Older people, or just the lonely and isolated, benefit vastly from keeping a pet. Animals are used increasingly in therapy for the disturbed or traumatised.

Their senses are so vastly better developed than ours that they can do many of the things we can’t. They have a very strong ability to feel emotions, and give and receive love in much less complicated ways than humans do.

I have learned a great deal from the animals I’ve had in my own home, and from the hundreds I’ve known and worked with at PAWS.

I never owned a dog in my life until my mid-50s.

Now I simply wouldn’t be without one. And I believe the argument that I hear all the time – ‘Animal lovers just don’t care about people’ – is equally misguided.

Just within my own wide circle of friends and acquaintances, among the first to respond to anyone in a crisis are those who are already doing something for animals.

It isn’t divisible. If you’ve never spent an hour or two offering simple help to an animal shelter, you won’t know what you are missing until you try it out.

A relatively large organisation like PAWS uses at least 70 volunteers over the whole spectrum of its activities, and we never have enough.

Cleaning, grooming, walking or just socialising are absolutely essential if an animal is to be re-homed.

Those who can do a bit of short-term fostering of dogs or cats are in particularly short supply.

And if you don’t live within the PAWS area, you will find other organisations wherever you are.

Mahatma Gandhi said: “The greatness of a nation and its moral progress can be judged by the way its animals are treated.” And his record of doing things for people wasn’t too bad, was it?

By Mike Dornan, from PAWS