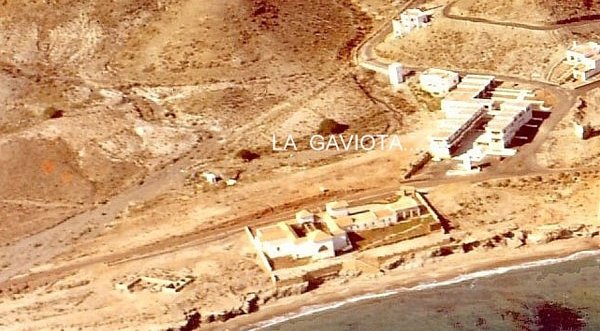 GAVIOTA: The last premises on the beach leaving Mojacvar and going to Carboneras. A "must stop" for the last coffee.

THE houses we were selling for as little as €12,000 we could actually construct for about a third that.

That is, if someone knew how to build them.  We didn’t.  Consequently our time was spent placating outraged clients.  In every aspect of building our workers had found ingenious ways to circumvent our instructions and construct by their own primordial DNA patterns.

A lady would come in with the kitchen tile she had hidden in her purse and ask me if it wasn’t what we agreed?  I insisted she was totally correct and none dare say to the contrary in front of me.  Then she would drive me to her house and therein start screaming at the top of her lungs “why we put the bright fucia green in?”  I was gob-smacked. Couldn’t find words enough to save me, nor a hole to crawl into and hide.  As she ranted her entire skin colour turned to a reddish purple and that blossoming volcano grew in size and stature. She was hissing, spitting, salivating on the floor and constantly reaching for me to crush in her hulk like hands.

As I stumbled about searching for a place to conceal myself within the unfurnished premises I tripped over boxes of tiles that were hers, the original order. The ones she wanted. The ones taken to house and left right there in the kitchen with the design she wanted. That ratcheted the argument up by another 26 decibels.

By now people on their way to Carboneras were parking up to watch the live action. TV back then was limited to eight hours of mass and two minutes of the weather report. News was off limits to the public.

Gypsies showed up outside and told people where to park for a small fee while I raced about inside fighting for my life.

The next day we decided to convert the empty office over the road from us into a bar in which we could keep the pleadings on neutral territory with the possibility of rescue.  Upon our client’s arrival to view their house and turn over that final payment it was agreed to take them into the bar, which had been given the quaint name of La Gaviota.  Drinks were free for the clients, with us pouring as much down their necks as we could before the final exchange of keys.

The running of the bar was left up to me. At that time we were located on the last stop leaving Mojacar and driving to Carboneras, nothing else existed along route. No one ever stopped. I started to learn Sea Gull speak and the names of the boat owners that would wave at me coming home from another day’s fishing.