Mama´s place is a home from home 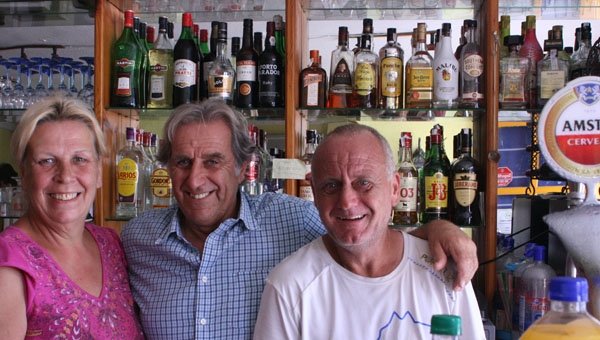 NEVER in my brief 44 years history in Mojacar has a bar opened and had such a dramatic effect upon the entire community from a cultural and sociological point.

Some open promoting fine exquisite food, so highly priced no one can afford to eat there. Let me be another to sing the accolades of BFM’s, accronymn for Big Fat Mama’s a little corner of Mojacar that takes its culinary efforts very responsible and from the goodness of their hearts has added main stream civic duties too.

Historically the placed started as Sal’s bar, but due to her illness Carol and Michael took over the running of it (but kept Sal’s sign out of respect) and rechristened the place — BIG FAT MAMA´S — a name alluding to mother’s home cooking and mother’s patience and caring toward her brood of clients. It is run that way, a friendly corner where everyone meets and greets you as an old friend and no one is in a hurry to go anywhere.

BFM’s is also the place chosen by the Mojacar veteran’s football club as their home residence when they are not playing in the mid-day sun. Noel Coward’s admonition that only “mad dogs and Englishmen go out in the mid-day sun” has been flipped on it’s ear when you realize the veterans football team is composed of some 16 different nationalities all proudly acclaiming the welcoming embrace given them by BFM. Sunday lunches are often consumed amidst a babble of most of the earth’s major languages and all the earth’s favorite jokes. Everyone can participate on the football scratch card that has been disgracefully won by a particular ten-year-old English boy more often than not. It makes for lively banter, but the kid’s also smart enough to buy drinks often to avoid menacing tackles or bar room wedgies.

Now, if the challenges of recreating a bar and trying to pull in very analytical and critical customers during these difficult times isn’t a hill big enough to challenge them, they also spend considerable time and their own money promoting different charities both local and world wide. Last week it was Help for Heroes and in the coming weeks they’ve already got a list a Mama’s arm’s length long to lend their support. Secretively, that special altruistic caring part of them was brought over from England wherein they had already founded a major benevolent charity known as “Angels with Dirty Faces” that has done so much for children with Down’s syndrome.

BIG FAT MAMA’S is located across the street from the Hotel Continental and has really good food at very low prices and a friendly staff. Carol, Michael and Graham will make you feel at home, just like Mama wanted it — with that homespun care.

P.S. I am yet to find anyone Big or Fat but Mama’s care is certainly there.