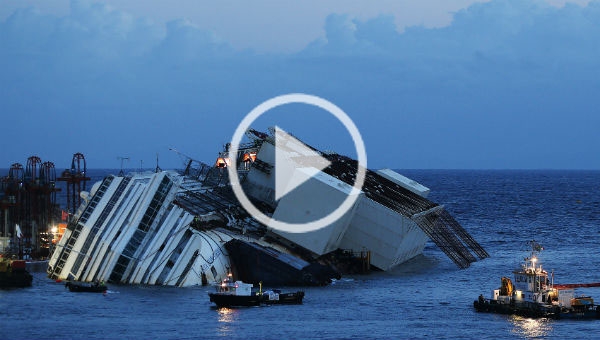 GIGLIO, Italy (Reuters) – Engineering teams on the Italian island of Giglio began lifting the wrecked Costa Concordia liner upright on Monday in one of the most complex and costly maritime salvage operations ever attempted.

The vast hulk of the 114,500-tonne cruise liner has lain on its side for more than 20 months, dominating the tiny port in the Tuscan holiday island where it ran aground and capsized on January 13, 2012, killing 32 people.

After a three-hour delay caused by an overnight storm which interrupted final preparations, salvage crews started the so-called “parbuckling” operation at around 8.00 a.m. British time.

The first signs the wreck was shifting were registered at around midday as underwater cameras recorded water swirling in the area where the metal was resting on the sea bed.

“It’s all quite within projections, both in terms of measurements and the way the wreck’s behaving,” Sergio Girotto, project manager for contractors Micoperi, told reporters.

In contrast to the accident, a catalogue of mishap and misjudgement over which the Concordia’s captain Francesco Schettino faces multiple charges, the salvage operation has so far been a tightly coordinated engineering feat.

At a cost estimated so far at more than 600 million euros ($795 million), it is expected to be the most expensive maritime wreck recovery ever, accounting for more than half of an overall insurance loss of more than $1.1 billion.

A multinational team of 500 salvage engineers has been on Giglio for most of the past year, stabilising the wreck and preparing for the start of the lifting operation.

The ship, a floating hotel carrying more than 4,000 passengers and crew, sank when rocks tore into its hull after it came too close to shore at the start of aMediterranean cruise.

Marine insurers who have to calculate the cost of covering a new breed of large cargo and cruise vessels will be watching the project on Giglio closely, well aware that any problems could have a significant impact on future insurance contracts.

On Monday, Italian Environment Minister Andrea Orlando said that Italy, which is seeking compensation for the environmental damage caused by the wreck, should be able to put a figure to its claim once the damage to the seabed became visible.

Engineers say they are confident the operation will be a success, although the procedure has never before been attempted under such difficult conditions on a vessel of this size.

“We have done parbuckling before but never on a location like this,” Nick Sloane, the South African engineer coordinating the recovery for contractors Titan Salvage, told Reuters.

“She is on the side of a mountain on the seabed, balanced on two reefs and she is a really large ship – she’s three football fields long, a hundred thousand tonnes plus… So it’s never been done on this scale,” he said.

The operation is scheduled to take 10-12 hours with the most delicate phase expected at the beginning, when hydraulic pulleys begin to shift thousands of tonnes of metal off the rock bed.

“Let’s say those were the most uncertain moments because we had never been able to say with any certainty how embedded the wreck was,” Girotto said.

Salvagers are waiting to see how the weakened structure will react to the strains of being pulled upright and Girotto said it was still unclear how badly damaged the section of the hull that had been resting on the ground was.

A series of 11 towers with hydraulic mechanisms controlling 205-kg (450 lb) cables under the ship and attached to its side will slowly rotate the vessel until it is sitting on six specially built platforms drilled into the granite rock bed.

During the operation, crews will look for the bodies of crew member Russel Rebello and passenger Maria Grazia Trecarichi.

Once the ship is upright, salvage teams will spend a number of months stabilising it and preparing for it to be re-floated with the aid of additional giant buoyancy tanks before it is towed away for scrap, probably next spring.

On Giglio, residents were hoping the wrecked ship which has given their island worldwide fame would soon be gone.

Giancarlo Farni, who said he was one of the first rescuers on the scene when the stricken Concordia went down, said the wreck had been in place for long enough. “I saw it sink and now I want to see it brought upright and taken away,” he said.