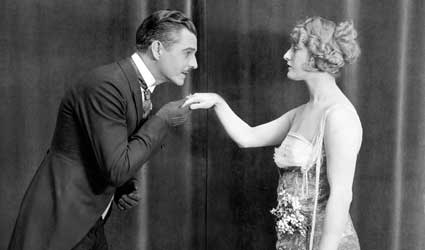 AFTER more years than I care to remember, I still recall the elbow in the ribs. “Get up, son. Give the lady your seat.”

When I became less a callow youth I would volunteer my bus seat without a poke in the ribs. It was, and still is, my second nature to keep open a door for an approaching lady.

I help elderly people on or off public transport or I take their bags whilst they alight. I am not sure who gets the warmest glow, them or me.  Civility towards others was drummed into me but I confess there have been lapses.

Etiquette might have been the first French word I learnt. As I helped a new member of the staff with her coat, I sensed her body ‘blushing.’   The same happened when I held the car door open for her. She afterwards told me that no one had ever done that for her before. Jayne was in her late 20s

A little before my time true gentlemen got to their feet when a woman arrived in the room. I do recall that when passing a woman a man might doff his cap or at least touch its brim.

Conversational good manners have disappeared. It seems that everyone agrees with the principle, “I disapprove of what you say, but I will defend to the death your right to say it.” Do not expect it to be other than fine words.

Today there seems to be a streak of almost medieval intolerance shown towards those of conflicting view. Unwillingness to simply accept an opinion often leads to a verbal brawl.

During the 1930s and earlier, mining villages and similar working class communities across England had their debating societies. Each speaker was accorded civility and debaters’ opinions were respected. One suspects that fear of a punch-up or a visit from Plod would discourage such freedom of expression these days.

According to one survey, many young people have never written a handwritten letter. It is inconceivable that they might pen a few expressions of gratitude to someone who had given them a gift, shown a kindness, attended a function or perhaps accommodated them for a few days.

Recently our group was disappointed to find a Sunday dinner restaurant fully booked. Stuff happens but given the discourteous brush-off, we will not be visiting a second time.

Many in public service are sadly lacking in people skills. Ironically, it is not the youngsters who tend to be bad mannered; the worst offenders are those old enough to know better.

There are of course many exceptions to the rule, but the incivilities of an intolerant or rude minority spoil everyone’s day. Perhaps it is our fault for tolerating the intolerance of others. I no longer do so.