Torres and Messi on target, Atletico surge ahead 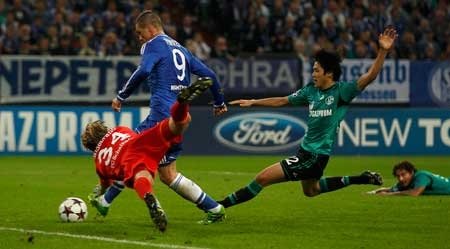 (Reuters) – Lionel Messi marked his first start after injury with a goal in Barcelona’s 1-1 draw at AC Milan in the Champions League on Tuesday while Fernando Torres got two as Chelsea thumped Schalke and Atletico Madrid’s charge continued.

Robert Lewandowski got the 82nd-minute winner as Borussia Dortmund put the brakes on Arsenal’s campaign with a 2-1 win in London that, along with Napoli’s 2-1 victory at Olympique Marseille, put three teams on six points in Group F.

There is a clear leader in Group G, where Atletico made it three wins from three with a 3-0 victory at Austria Vienna that left them a point away from the 10 that are usually enough to send teams into the last 16 of Europe’s elite club competition.

With Diego Costa scoring twice, including a stunning solo effort, they went five points clear of second-placed Zenit St Petersburg, who made the most of the sixth-minute sending off of Porto’s Hector Herrera – the competition’s fastest ever dismissal from two yellow cards – to beat their hosts 1-0.

In Group E, Chelsea moved level on six points with Schalke 04 at the top with a 3-0 win in Germany where Torres celebrated his 100th start for the club with the fifth-minute opener and another after 69 minutes before Eden Hazard added a late goal.

The top two are clear of third-placed Basel, who have four points ahead of Steaua Bucharest on one after those two teams shared the spoils in a 1-1 draw in Romania.

Celtic got their first points in Group H after a James Forrest penalty on the stroke of halftime and a deflected shot by Beram Kayal early in the second half helped them to a 2-1 win over Ajax Amsterdam, who got a consolation in added time.

Barca are in charge of that group with seven points, while Milan – who had gone ahead through Robinho’s ninth-minute opener before Messi levelled after 23 minutes – have five points. Celtic are on three points with Ajax bottom on one.

The day’s biggest statement of intent came from 2012 European champions Chelsea, who have now made amends for the home defeat by Basel in their opener with two away victories.

Spaniard Torres, so often uninspired in domestic competition, once again shone on the big stage with two goals and could easily have had a hat-trick as he smashed a header against the bar from just inside the area.

He, like Messi, had just returned from injury and his lively contribution came at just the right time for his club.

“If you do garbage (against Basel) then you have to clean it up and we cleaned it up,” Chelsea manager Jose Mourinho told Sky Sports. “We’ve got two matches at home so now we are in good condition to qualify and we’ll try to finish top. It’s an important victory for us.”

The glamour match at the San Siro where seven-times European champions Milan hosted four-times winners Barcelona fizzled out in the second half after a frantic opening period of pressure from the Italians.

Milan took an early lead through Robinho following a smart exchange with Kaka after nine minutes but with Barca then dominating possession, it was a matter of time before they made it count.

Andres Iniesta found Messi – making his first start after a three-week layoff – in space on the right and the Argentine kept his cool under pressure from Kevin Constant and Riccardo Montolivo to find the bottom right corner to equalise.

“We lost two points… because we created more goal chances and for this reason we deserved a victory,” said Barcelona coach Gerardo Martino, whose side, like Milan, remain unbeaten in the group.

Unlike Martino, Arsenal manager Arsene Wenger would have been happy with a draw in their match at home to Dortmund because it would have kept them top of Group F.

Instead, the section was blown wide open as the Londoners, who lead the Premier League after some stylish performances and had enjoyed back-to-back European wins before this match, received a reality check.

The Germans, whose coach Juergen Klopp watched from the stands as he served a touchline ban, took a 16th-minute lead through Henrikh Mkhitaryan before Olivier Giroud equalised for the hosts before the break.

Wenger had spoken of the danger of Dortmund’s Polish players before the game and his fears were proved right when Lewandowski volleyed home eight minutes from time to snatch the points.

“We were not as good as we can be offensively and some of the players tonight were not as fresh as recently,” Wenger told reporters. “If you can’t win games you mustn’t lose them.

“In the second half we were on top but if you concede two goals you can only say we have to look at ourselves at not being mature enough in situations like that.”

“It’s tight now and difficult for us. But possible.”

Group G, meanwhile, is anything but open as Atletico Madrid became the only team to still have a 100 percent record after three rounds of matches.

Costa enjoyed a dream competition debut in Vienna, scoring the second and third goals including a superb effort after he raced from inside the Atletico half and danced past the last defender before slipping the ball into the corner of the net.

It was the other extreme for another Group G player, Herrera, whose first Champions League start lasted six minutes.

The 23-year-old Porto midfielder was shown his first yellow card after a foul and then picked up a second booking for encroaching on the free kick he had just given away to set a red card record he will want to forget.

The hosts almost managed to hang on for a draw before an 86th-minute header from Aleksandr Kerzhakov stole the points for Zenit, with the salt in the wound coming from the fact that ex-Porto forward Hulk had set up the goal.