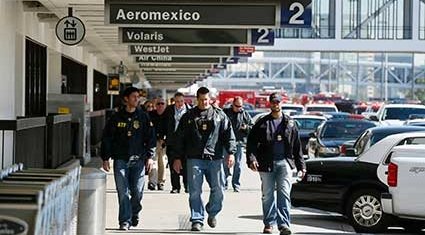 LOS ANGELES (Reuters) – FBI agents were on Saturday probing the background and possible motivation of a gunman who opened fire at a packed terminal at Los Angeles International Airport and shot dead an unarmed federal agent.

Authorities have identified the suspected shooter in Friday’s attack as Paul Anthony Ciancia, 23, and they said he was shot and wounded by police in an exchange of gunfire at the airport’s Terminal 3.

The gunman was armed with an assault rifle and touched off panic and chaos at one of the world’s busiest airports. Hundreds of travellers ran frantically for safety or dove for cover behind luggage, and loud alarms blared.

The gunman, a U.S. citizen who appeared to be acting alone, pushed through the screening gates and ran into an area where passengers board flights, before law enforcement officers caught up with him in a food court, Patrick Gannon, chief of the Los Angeles Airport Police, said at a news conference.

The officers shot him at least once and took him into custody, he said.

The gunman shot at least two Transportation Security Administration employees, one fatally, said Special Agent David Bowdich of the FBI. The slain TSA agent, identified as 39-year-old Gerardo Hernandez, was the first from the agency to die in the line of duty.

The FBI late on Friday could not provide a total number of people shot in the attack, Eimiller said. Paramedics took five people wounded at the scene of the shooting to area hospitals, Los Angeles Fire Department officials said. But they could not say if all of those people were wounded by gunfire.

The Los Angeles Times reported that among the wounded was Brian Ludmer, 29, who was shot in the leg and works as a high school teacher in the Los Angeles suburb of Calabasas.

The investigation into the attack will probe the shooting itself as well as the gunman’s background and possible motivations, Bowdich said on Friday. “Our goal is to do a true scrub on the individual to find out what was the tipping point for this person,” he said.

Pennsville Police Chief Allen Cummings said he had been contacted by Ciancia’s father before the shooting, prompted by a worrisome text message from the young man to his brother.

The police chief declined to elaborate on the nature of the text message but said that family members told investigators they had no previous indications that Ciancia, who moved to California about 18 months ago, was troubled.

A U.S. official who asked not to be identified said federal investigators were trying to determine if the gunman had been targeting TSA agents in the rampage.

Tom Ridge, former secretary of the U.S. Department of Homeland Security which oversees the TSA, said he did not think security changes at airports could help prevent such an incident from happening again.

Ridge said in a phone interview he opposes the idea of arming TSA agents, who are tasked with screening air passengers.

“That (arming them) requires a level of sophistication and law enforcement training, and at the end of the day, I’m not sure it’s going to make that much of a difference,” he said.

The incident affected an estimated 1,550 arriving and departing flights carrying over 167,000 passengers, airport spokeswoman Nancy Castles said in a statement.

A number of those flights were grounded or diverted as police evacuated passengers and shut down three terminals during the incident.