Arsenal will start 2014 on top of the Premier League 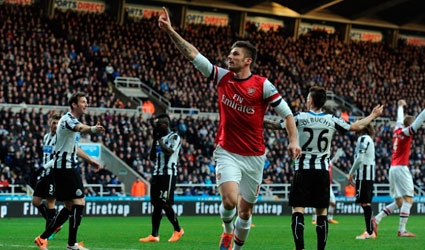 Arsenal will start 2014 on top of the Premier League after grinding out a well-deserved 1-0 win at Newcastle on Sunday 29. The crucial goal came midway through the second half when Olivier Giroud guided home a header from Theo Walcott’s free-kick.

Arsène Wenger’s side had dominated early in each half but had to soak up significant Newcastle pressure in the latter stages. However Arsenal are made of stern stuff this season and managed to hold off one of the form sides in the Premier League.

Questions continue to be asked of this side but they continue to respond. Yes, points were dropped in mid-December against Chelsea and Manchester City but Wenger’s men always come back.

And right now, as the division reaches the halfway stage, they are on top of the pile once more.

Wenger made the expected changes for the trip to St James’ Park – but they were largely enforced.

Mesut Ozil had fallen on his shoulder while Thomas Vermaelen had succumbed to sickness. Jack Wilshere was back from suspension and Laurent Koscielny had recovered from the cut on the knee he had sustained at Manchester City.

Tomas Rosicky returned to make his 200th appearance for the Club and Mathieu Flamini came back into the side.Mikel Arteta and the injured Aaron Ramsey dropped out.Nacho Monreal was left at home as he was suffering from sickness too.

If Arsenal were suffering from a little festive lethargy it did not show. The visitors were fast out of the blocks and pressed back their hosts in the opening stages.

Santi Cazorla and Wilshere, impish and inventive, led the charge but their contributions were frequently denied by a last-ditch Newcastle leg or head.

It took the home side 15 minutes to break out of their half but they created the first bona fide chance when Loic Remy chipped to the far post and Moussa Sissoko’s header was held by  WojciechSzczesny.

Wilshere fired over and Rosicky smashed a shot into the stomach of keeper Tim Krul.

But by now Newcastle had parity in the game. The closest they came to breaking the deadlock was when Mathieu Debuchy drove wide.

Mertesacker responded in kind as the first half seemed to meander to a somewhat niggly conclusion.

However Newcastle would nearly steal the lead in injury time. Sissoko’s rasping drive was tipped over by Szczesny and, from the resulting corner, Debuchy sent an arching header against the far post.

It was a shot across the Arsenal bows and a reminder that the home side were perfectly capable of profiting if the visitors were wasteful in front of goal.

The tempo of the game had been admirable in the first half and it remained lively after the restart.

Vurnon Anita’s cross caused consternation before being cleared. It was about as close as Newcastle got before they went behind.

Gradually Arsenal managed to wrestle control of the game and began to put on the pressure.

Eventually it brought the opening goal.

On 65 minutes Check Tiote fouled Cazorla and Walcott floated an excellent free-kick into the area. Giroud ghosted in to glance home a header. It was his 11th goal in all competitions this season.

It should have been 2-0 almost immediately. Wilshere prodded Walcott clear who poke a shot past Tim Krul. It was cleared to Giroud, who scuffed an effort wide with the goal at his mercy.

Newcastle’s response was immediate. They muscled their way back into the game but despite throwing ball after to ball into the Arsenal box the closest they came was when Szcznesy’s clearance hit Remy and trickled past the post with the keeper helpless.

Newcastle continued to batter the visitors’ box in the dying minute but Mertesacker and Koscielny stayed strong. It has been a show of strength by their side.