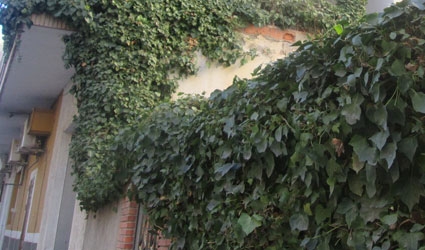 Short back and sides for garden hedge.

THE Partido Popular (PP) of Albox have made a complaint of public abuse by the socialist government after a council worker was photographed carrying out gardening work in the private garden of a socialist councillor.

The photo shows workers loading garden shrubbery onto a council vehicle. This is not the first time the PP has denounced the “private use” of official vehicles by both Mayor Rogelio Mena and his administration.

The PP claims, it is well known that official vehicles are used for the most varied private activities of the socialist councillors, such as pigeon flying, picking olives, weekend excursions and taking their wives to the supermarket.

The PP also claims to have seen official cars parked outside beach bars in Mojacar.

The PP in Albox has said these facts are particularly serious, especially when public services provided in the town are so precarious, stating: “It is unacceptable that we have to endure  these situations of abuse, while the mayor is cutting essential services.” The party has stated that these  facts will be reported to the courts, because “it is outrageous to see the mayor Rogelio Mena, with so many irregularities and abuses going on looking the other way and not taking any responsibility.”

Mena, has been quick to respond to the allegations and has announced the possibility of legal action against the PP for accusing the town’s municipal workers of performing tasks and services for individuals. “This government team respects and enforces the obligations and duties of the municipal staff. As mayor I can not allow to go unopposed the questioning of their work, which is to serve all the people.”

After categorically denying that any worker was cleaning and carrying out gardening work in a particular family  home of a councillor, Rogelio Mena insisted that “cleaning services cater to all citizens alike and when there is a call to pick up large appliances or garden rubbish as well as the weekly market we move to collect up the remains, whoever it is and whatever party it is.

“I have urgently requested the corresponding reports for municipal services to initiate appropriate legal action in defence of the legitimacy of employees in public administration and their political representatives,” he said.

Mena points to PP frustration because “this week we have opened a new Sports Pavilion and started the water treatment works to permanently solve the water problem. Also, we are to put out to tender the sports centre and have adopted the landfill payments.”

The mayor concluded: “We are trying to bring Albox out of a difficult situation and I will not accept or allow attacks from the PP without adequate response.”