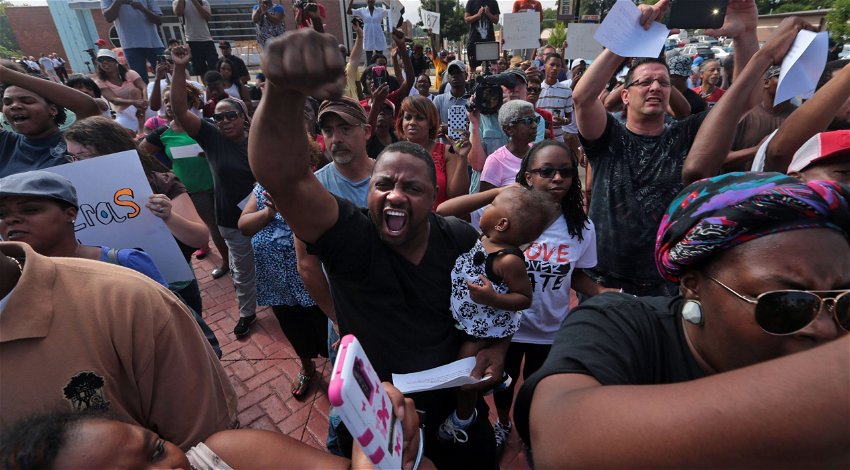 Armed police in St Louis, Missouri, have responded with force to disperse hundreds of protestors as demonstrations over the killing of teenager Michael Brown intensified for the fourth night in a row.

Officers armed with assault rifles and armoured trucks fired tear gas and rubber bullets into a largely peaceful protest after a couple of bottles were thrown at them.

Many feel that the law enforcement’s heavy-handed reaction to the demonstrations has only made matters worse. While demonstrators protested with their hands in the air, they complained of military-style tactics being used against them.

Speaking to The Guardian, Justin, a 29-year-old protestor said: “The police are responding with force, which you can understand to a certain degree.

“But this amount of force was unwarranted. This is an abuse of force. No one is firing guns at them or running at them. This is an overreach.

“Were people yelling at them? Were people shouting obscenities? Yes, that’s normal. But no one rioted, no one looted, no one threatened to harm anyone. This is getting out of control. It’s like a military action.”

Jay Nixon, Missouri’s governor, described the events as deeply troubling, and plans to visit the area on Thursday. He said: “While we all respect the solemn responsibility of our law enforcement officers to protect the public, we must also safeguard the rights of Missourians to peaceably assemble and the rights of the press to report on matters of public concern.”

Residents in the suburb of Ferguson are angry at what they see as the unprovoked, racially-motivated shooting of 18-year-old Brown by a police officer on Saturday.

The police maintain that the officer involved, who has still not been named, was acting in self-defence to an assault by Brown. Eyewitnesses to the incident, however, report that the unarmed African-American youth was shot multiple times after refusing to get to the ground on the officer’s orders.

General sentiment amongst this largely black community is that this never would have happened if Brown had been white.

Orders have been given that no demonstration takes place after nightfall, but it remains to be seen if such tactics will be used again should protestors regroup on Thursday night.