Consul pledges that front-line services will not change 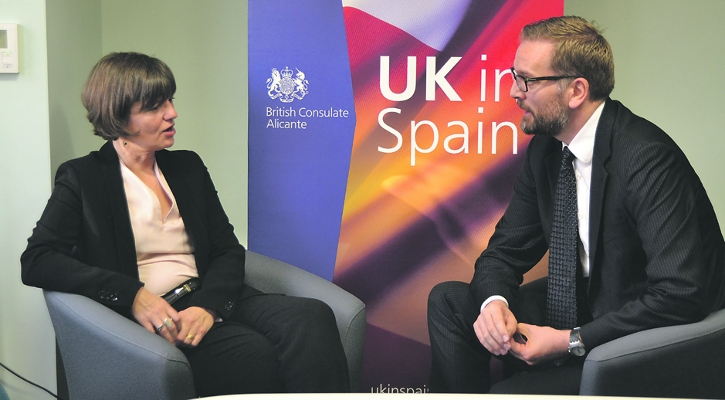 NEW British Consul Sarah-Jane Morris has said front-line support to the consulate service across Alicante will not change and will continue to be headed by Vice-Consul Lloyd Milen.

Mrs Morris (pictured with Lloyd Milen) addressed concerns that the service was being cut and streamlined as she will be based in Madrid where she will continue her work as the Consul-General in Madrid serving Central and Northern Spain as well as overseeing Alicante.

She said: “There will be no change to the front-line service and the consular team here remains and is the biggest in Spain. I will be making my best efforts to make sure it is unnoticeable to expats.”

The management of Alicante and Madrid consulates by one consul follows the model already used elsewhere in Spain, with the nine British consulates covering Spain and Andorra now managed by three British consuls.

Having served as consul in Madrid for the last two years and spending 10 years working in the consular field, Mrs Morris believes her experience can only aid and assist the 165,000 expats registered.

“I have worked a lot with central government already on issues such as residency and healthcare and have that direct line so rather than listening to issues and passing them on, residents will have a quicker route to the front line,” she explained. Logistically, she said she can also be in Valencia quicker from Madrid than the team travelling from Alicante.

With a background in the voluntary sector, having worked in Africa and Asia and also for the Red Cross in Madrid, the new consul is keen to continue the work of her predecessor Paul Rodwell and forge stronger relations with local charities. She already has links with local organisations.

“I am on the executive committee of Age Concern and have just been supporting the Samaritans in setting up a branch in Madrid so know them also,” Mrs Morris said.

She believes that charities have a lot to offer the community and are a great way of forging international relations.

“The Spanish culture is not so rich in volunteering but they are there and we must tap into them and it is a great way to improve your Spanish,” she added.

Sarah-Jane Morris will be in Alicante regularly and is looking forward to the challenges that lie ahead and in meeting the local community more.