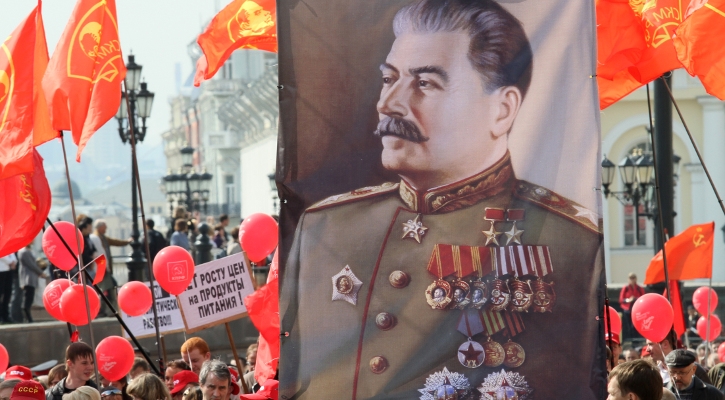 STALIN: Russians are oblivious to or forgiving of his enormous crimes.

I have more Russian friends than you could shake a stick at. I have no wish to do so, but my friends firmly believe the US and EU carry a big stick. They don’t take kindly to it.

Stung by their being stigmatised, offended by hypocritical posturing, our hurt and exiled fellow Europeans turn east to China and south to India. The Russians now merge their diplomatic, defence and trade relationships with the monolithic BRICS trading bloc. BRICS control almost 40 per cent of the GDP/PPP in the world. That is more than the US and EU together.

Given the minuscule size, troubled and shrinking economies of the EU and US, one wonders if the EU and US in fact exile themselves. The West certainly seems to be now hooked on its own sanctimonious petard.

At home, offended Russians now resort to strident nationalism. In Russia today there is a heady mix of Soviet patriotism and Third Reich symbolism, the goose-step parades are back. The serried sea of flags and massive arms’ displays are now eerily reminiscent of the Reich during the 1930s. President Vladimir Putin’s standing is at an all-time high, Russian opinion of the EU and US is at an all-time low.

The Russians have good memories.  They don’t like sieges, they know how to survive them and turn them on their foes.  The Russians are particularly embittered by America’s ousting of the legitimate government of their neighbour and partner, Ukraine. Imagine American mortification had the Russians invested $7 billion on ousting the Mexican or Canadian governments.

Our Russian friends are aghast that the West openly supports pro-Nazis in Kiev. These swastika-flaunting Banderistas are not Nazis. When the Reich occupied Ukraine in 1941 Banderistas were thrown into concentration camps; Stalin released them. They are Ukrainian xenophobes.

Their use of the swastika is no more reflection on their agenda than it is on the stationery of Skinheads United. Before the war use of swastikas was widespread.  America’s Boeing aircraft manufacturers used it as did Coca-Cola who displayed the ancient symbol of good fortune.

Few in the West realise how effective the Russians’ ‘Great Patriotic War’ brain- laundering is. Like the Americans and British, the Russians believe they alone defeated the Nazi meat-grinder and saved the West.

Russians are oblivious to or forgiving of Stalin’s enormous crimes. They are blissfully unaware that ‘victim’ Russia in 1941 was poised to attack the Reich from the east when Germany pre-emptively struck with disastrous effects for the USSR.  The Russians firmly believe they were the victims. They forget about Stalin’s wars on Finland, Poland, etc.

They now see the US and EU as being the new Nazis. The West should be under no illusions. Don’t mess with the Russians. This is not 1939 and the killing fields are now much more even.