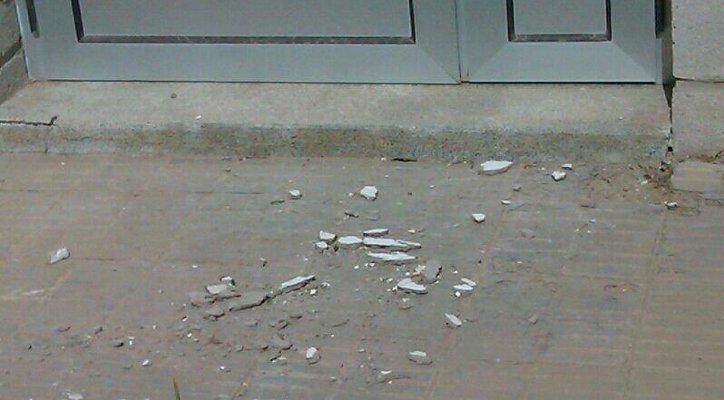 FALLING DOWN: Rubble and cornicing is regularly falling off the school in Rojales.

PARENTS, teachers and pupils in Costa Blanca towns are campaigning on education in their areas. Here we round up the action: an online petition to replace a crumbling school in Rojales, outrage over students forced to learn in portacabins in Orihuela Costa, and protests about overcrowding in a Gran Alicant primary.

AN online campaign has been launched demanding a new school be built in Rojales.

Residents have joined AMPA parents association from the Principe de España school, which has long been hitting the headlines for all the wrong reasons with parents and teachers citing a catalogue of structural faults in the school building which is over 40 years old.

The campaign ‘SOS school in ruins, children at risk in Rojales,’ on the AMPA Rojales Facebook page, is seeing dozens of residents join the cause calling for a new school to be built, which was promised by the Ministry of Education in October 2014.

“So far we have received no response evidencing that the project is actually on the agenda of the government,” said President of AMPA, Maribel Chazarra, who added that the educational community is even more determined than ever to continue fighting for children to have a “decent centre.”

IN Orihuela Costa, AMPA, the parents association at the Playas de Orihuela school, protested at the school gate, reminding the Department of Education of their continual failures to build a new school.

President of AMPA, Yolanda Fernandez, said the group is “sick” of failed promises by the Generalitat regional government failing to build new premises with 20 portacabins now housing the students, who have been in portacabin facilities for 13 years.

After one of the boards fell off a roof in a classroom housing a group of five-year-olds, action was taken and protests will now be held every Monday morning outside the school. No one was injured in the accident, but parents fear they will not be so lucky next time.

AMPA is looking at another series of actions against the Department of Education and has not ruled out taking legal action.

PARENTS of students in the Vicenta Ruso school in Gran Alacant are now carrying out protests every Friday to demand a new primary school be built in the area. They claim the school is now operating at almost twice its capacity.