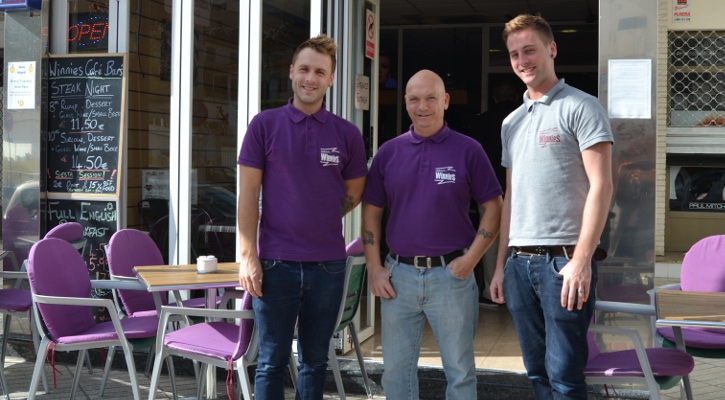 LOCATED just minutes from the picturesque La Cala de Finestrat beach, Winnies may be small in size, but it boasts a large heart.

Owned by Kevyn Noble, this family run café bar has certainly won the hearts of the locals since it opened in July 2013 with Kevyn’s father, partner and chef Mandy also at the forefront of it’s success.

For Kevyn, the location was ideal for his vision of a place for regulars and tourists alike offering quality, home cooked food. Kevyn was previously a brand manager for Corona and has travelled around Europe working for breweries and creating plans for large companies and smaller freehouses, so has extensive knowledge of the industry which he is putting to good use, particularly in a simple thing such as cleaning the beer pipes: “Many companies were not cleaning them, so I chose San Miguel on tap as the technician comes and gives the lines regular cleans, so it is always clean beer.”

After taking voluntary redundancy and moving to Spain for the healthier climate and to be near his father and brother, he opened Winnies. Named after his late grand-mother whom he said was “the most influential in my life, teaching me values and Catholic morals” the café bar is a fitting tribute.

Food is fresh and the kitchen is open during winter months daily from 10am until around 8pm. Thursday is steak night and fish and chip Friday is always a popular choice with their fresh, beer battered cod a hit with customers old and new and booking is recommended for the Sunday roasts which cost €6.95. Small breakfasts cost from €4.50, sandwiches and toasties from €3.50 and for the hungrier appetite, try the mixed grill at €13.95.

Winnies also hosts a range of activities. So for a small bar, it is jam packed with events and activities to make a visit any time of the week a memorable one.

But don’t take our word for it, try it for yourself, reviews have flooded in since it was opened in July 2013 on their Facebook page and on TripAdvisor.