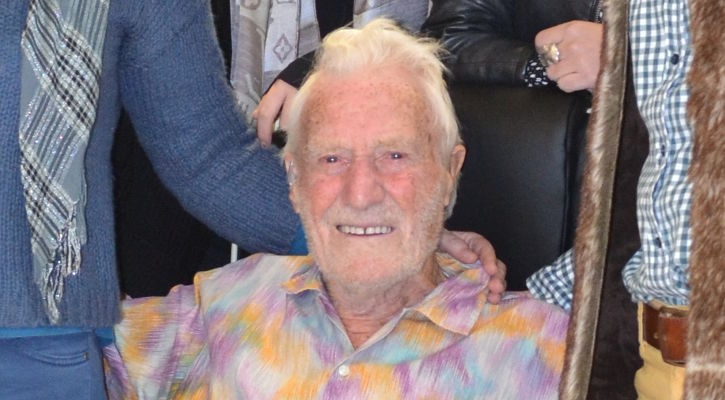 THE EURO Weekly News’s oldest reader (probably) paid a visit to its head office to give staff apiece of his mind!

Ninety six-year-old Bob Mitchell, who has been a regular contributor via our letters page, sent a touching note of thanks to columnists Leapy Lee, Mike Walsh and the former Mrs Ed, who remembered having a few run ins with him over the years.

Bob, originally from London, has been a regular visitor to the Costa del Sol for 30 years, and in that time has always picked up the EWN. We believe he is our oldest reader – unless of course you know better. If you do, drop us a line at [email protected]

With characteristic humour, he decided to thank the EWN ‘while he still had time.’ We invited him into the office to see behind the scenes, and presented him with a bottle of brandy and a ‘front page’ about his visit.

A man of forthright opinions he was- and still is- a communist, a stance that got him in to trouble in his younger life.  He was blacklisted as an ‘agitator’ from several jobs before ending up at the Post Office where he stayed for 30 years before retiring.

Bob may be frail but his mind remains sharp as a tack. “It is because I have never stopped thinking.  It’s kept my mind active. When I was young I thought I could change the world and everyone would live happily ever after, but here we are all these years later and nothing has changed. That’s a disappointment, but I never stopped trying!”

Editor’s note: Bob should be an inspiration to all our readers. Whether you agree or not with his politics he has remained true to himself and never lost his sense of fun. He has a keen sense of right and wrong. All at the EWN wish him well, and look forward to him visiting us again on his 100th birthday!

In his letter Bob said:

You are lucky to have two fine journalists in Leapy Lee and Mike Walsh, the paper also had an editor who called herself Mrs Ed.

All the three of them helped produce an excellent paper with the motto ‘Publish and be damned’ copying Cassandra of the Daily Mirror (before your time).

Now and again I had to write to put them right on a matter or two but I am 96 now, in a poor state of health, so I thought I had better write and thank you all for producing such an excellent paper.

Keep up the good work after I have gone.”

And in reply his three favourite columnists said:

It isn’t often folk like me get opportunity to have as a friend a person old enough to be my dad. As for your kind remarks: Bob, as a young traveller I was educated and became better informed due to my being befriended by men who, back then, were old enough to be my father too.

I have never forgotten the lessons and advice given; a few words in a bar or mess-room, were carried on over and passed on to those who take our place.

Well done on all of your achievements and congratulations on your clearly keeping your humour, your ability to express your thoughts as well as you have done.  I hope you are not after my job.  .

With respects and appreciation,

Only just before my time Bob. I do remember Cassandra but a little too young to appreciate his views. Delighted and somewhat flattered by your observations regarding the EWN

Praise from someone of your experience is praise indeed. Most of the credit must of course go to Ms Ed and our excellent editorial staff who manage to keep a little common sense in their ideas of what a publication should produce and opinionate in these troubled times.

I look forward to  hearing of your ‘Queen’s telegram’ and also to hearing your opinions for many years to come. Keep ’em coming Bob. And, as I’m sure you always do:
Keep the Faith
Leapy Lee

Dilip, the Euro Weekly News editor, has forwarded your letter to me and tells me that you will be visiting the office tomorrow.  It’s always satisfying when the paper gets a fan letter but it was also personally satisfying to be remembered so long after I stopped being Mrs Ed.

I imagine that could have something to do with the number of times you and I crossed swords!   Incidentally, you might be disappointed to learn that I’ve apparently mellowed considerably in the meantime.

I’m sorry to hear that your health isn’t so good but hope that after being a reader for so many years you enjoy seeing the newspaper from the other side of the counter.

P.S.  Cassandra in the Daily Mirror certainly wasn’t before my time…