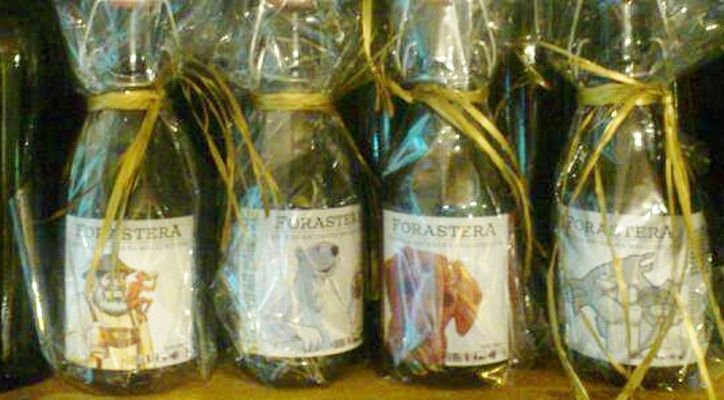 FORASTERA Mallorca is a unique brewery bubbling up a passion for those who enjoy a crafted beer made from natural ingredients, wisdom and passion.

Sven and his wife Marta arrived in Spain in August 2014 to bring to others some of the most refreshing and delicious beers by using their varied recipes. Having been in the beer brewing business for six years previously in Berlin, Sven is a perfectionist in his field, using five different kinds of hops from England, Germany, USA, New Zealand, and Australia.

The malt is also sourced from Belgium and Germany, which is all a special part of the process to achieve the finest results. Forastera beers are available for wholesale or retail and you can usually find Sven and Marta promoting their wares at the local ferias and bars.

At the moment you can choose from four types of beer delivered from 12 taps, and in the near future, cider drinkers will also have a treat to look forward to, as a new cider will be on the menu too. Sven says that many locals enjoy his special brew of pale ale named Paul Amber after one of his two dogs. Forastera is on Calle Llucmajor 61 Palma. Open Mon to Sat 4pm to 9pm.

Forastera beers are craft beers made in German, English and North-American style, with our own added touch. These are made with water from Mallorca and European malts and hops from all over the world.

The natural sediments show that the beer is not filtered, thus conserving all its flavour and properties.

Drink them with moderation as they do contain alcohol. Due to their crafted nature, the flavour of one bottle may vary slightly to that of another.

Ales are the oldest type of beer. They are fermented with a yeast called Saccharomyces cervisiae, which likes to ferment at comfortable temperatures between 15ºC and 24ºC. It does this quickly and intensely, forming a thick layer at the top of the cask.

Due to the fermentation at high temperatures, it has a strong fruity flavour and few bubbles. It is generally served at between 10ºC and 14ºC to allow all the nuances of its flavour to develop. The cereals were traditionally malted with wood or straw, giving a brown or amber colour and sometimes a slightly smokey flavour.

With the industrialisation of the 18th century, coal began to be used to roast the cereals. The coal burned more cleanly and at lower temperatures, giving a clearer colour malt. This malt allowed new types of beer such as Pale Ale and October Ale to be made.

Mallorca Pale Ale forms part of the India Pale Ale family of beers. A little lighter, it is adapted to the tastes of these latitudes, with good body and flavour.

Beer with a fruity touch, the most exquisite taste-buds also discover tropical fruit notes. A   recently discovered hop is behind this light and refreshing creation: citrate.

A hybrid hop obtained in the US by crossing other more traditional hops.

Amber  is a fossilised resin that sometimes contains flowers, and so gives its name to this type of beer. Amber Ale has a reddish colour and offers a soft, floral and agreeable flavour.

During the 18th century, ships sailed from English ports carrying beer for the British colonies. The ales that best survived the long journey to India were the stronger beers with more alcohol and hops. These were also more appreciated in the hot, damp climate and therefore still prove tasty in Mediterranean climes.

Saccharomyces eubayanus,  a stowaway yeast from Patagonia which may have arrived in Bavaria via fruit-flies, is the magic of Lager type beers, named for the German word for storeroom.

This was allied to common ale yeasts, making fermentation possible in cold Bavarian storerooms. It ferments slowly before falling to the bottom of casks after about 10 days. The result is a soft, clear beer with a refreshing malty flavour and bubbles. It is served nice and cold,   between 4ºC and 7ºC.

Helles is a variation of Lager, born in Munich on the first day of spring in 1895. Tasty, soft, with a slight note of hops that bursts on the tongue. Prost!