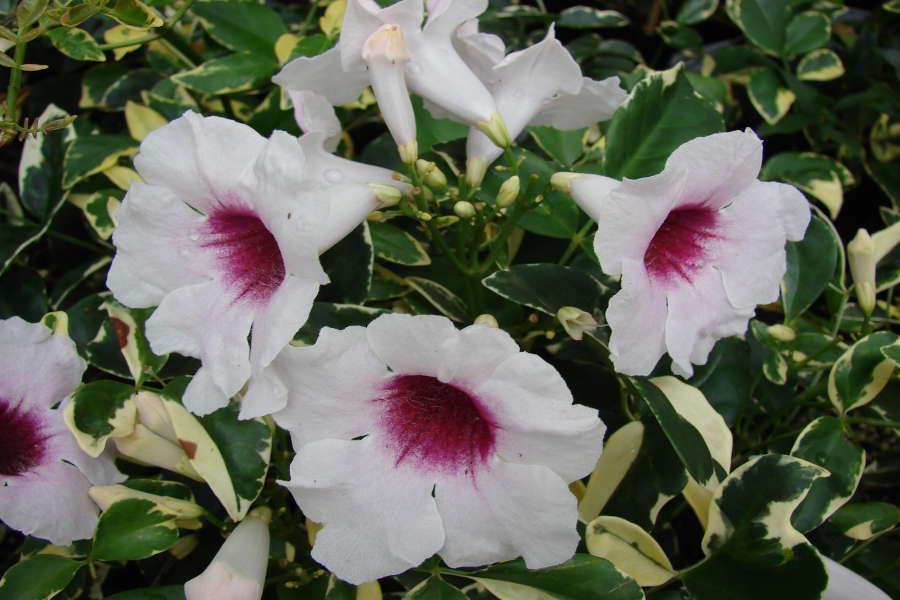 BIGNONIAS: Come into their own.

BIGNONIAS as a family come into their own in the autumn after the first rains have dampened the roots and temperatures have dropped five degrees or more.

The exuberant pink flowered Podranea ricasoliana, pink Contesa Sara trumpet vine can be seen climbing over walls, climbing through the upper growth of tall trees, covering dead trees and gazebos and even covering entire houses if let rip some years ago with no annual pruning except around doorways and windows.

This bignonia can also be used for ground cover as an almost entirely pink carpet on a bank or flat ground. In general it will flower until the first frosts and is best given a heavy winter prune each year.

The quieter evergreen Pandorea jasminoides, Bower vine, with white or pink flowers is sedate in comparison and makes a neat statement if trained in the style of a stephanotis on a wall or trained up through the leaves of a moderate sized carob tree to flower on the top like snow on the peak of a mountain. Mine I just prune to keep tidy throughout the year.

There are still bright red orange waxy flowers on Campis grandiflora, Chinese trumpet vines but since this variety does flower throughout the summer it is past its best in most gardens. However it only grows to a couple of metres so a dead heading is possible and this will still stimulate some new flowering shoots.

The last to flower are the less exuberant red, orange and yellow Tecomaria capensis, Cape honeysuckle, plants. In general these make colourful statements in mixed hedgerows or on the walls of houses or sheds. But with patience they can be trained to grow through open medium sized trees such as half dead pine trees.

New plants can be propagated by burying the end of new growth into the ground or into compost filled pots. Cuttings can also be successful.

So added to climbing bougainvilleas, jasmines and  passion flowers the vertical dimensions of Spanish gardens are a delight at present and can continue for many weeks along the coast and in inland valleys.

Lower down the heart of gardens are also colourful with strongly growing autumn flowering sages, tulbaghias or society garlics, marsh hibiscus in the shallows of ponds, euryops, margeritas, leonotis, lantanas of all colours and heights, late flowering lavenders and roses , multi-mixed coloured mirabilis etc. It is still dark being early morning so I cannot wander round the garden to see what I have forgotten.

And of course the autumn garden is not only colourful but also productive. In my case tomatoes, peppers, aubergines, courgettes, onions, carrots, radishes, lettuces, cauliflowers and a good mix of tasty basils are currently being harvested from raised beds and builders buckets. The 800 square metre allotment was given up a year ago as now approaching 80 years of age, an increase of thievery, tribes of roaming wild boar now that a decreasing number of hunters can’t control their numbers, and kilos of wind-blown and water-borne weed seeds make the once very productive vegetable growing campo around our village both physically and  economically non-viable. Sadly it is now almost entirely abandoned.