Axe man strikes in Marbella and is arrested 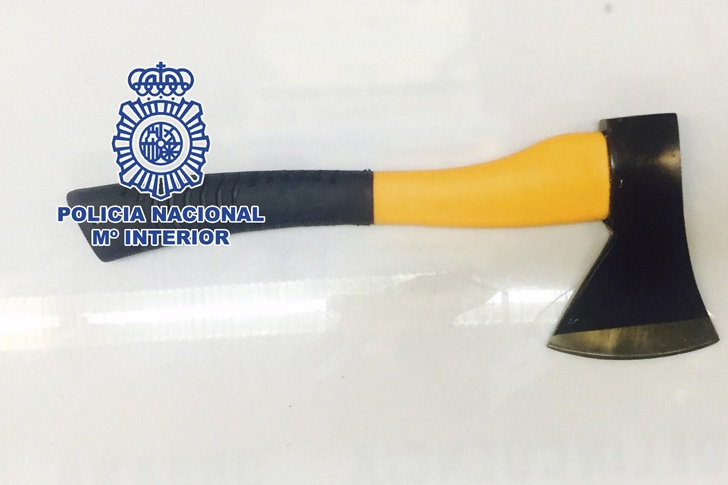 Axe and knife discovered in Ojen.

ON THE morning of December 30, at the hotel Baviera in the centre of Marbella in a busy area next to the city’s busiest taxi stand, a man entered the hotel reception at 7.30am and after threatening the receptionist with an axe made off with almost €700 from the till.

Said to be a middle aged man of apparent Spanish nationality he entered the hotel waving an axe about and used it to threaten the only person in reception at the time, demanding all of the cash from the till.

After obtaining the money, the attacker, who didn’t bother trying to hide his face, broke the security camera and made the receptionist show him where the recordings were kept to stop the police being able to identify him. He used the axe to break the cupboard door and pulled out everything inside including the router and internet connections, leaving the hotel with no internet for most of the day, before fleeing on foot with his ill-gotten gains.

The same man returned to Marbella 24 hours later, on New Year’s Eve, and threatened the receptionist at the Hotel Lima with an axe, this time fleeing with €800 although his face was captured on security cameras.

He then later went back to the Baviera and threatened the same unlucky receptionist for a second time, on this occasion escaping with less than €500. Following this, he went on to undertake a fourth attack at a third hotel.

With extreme presence of mind, the National Police were able to identify from the security camera and arrest a 31-year-old Marbella resident in Estepona on January 3 together with a 32-year-old man from Campanillas who had assisted in planning the robberies as well as a woman, from Ojen with whom they had been staying.

When they raided the house in Ojen, the police discovered the axe, a knife, another woman and €1,200 which is believed to be from the robberies.