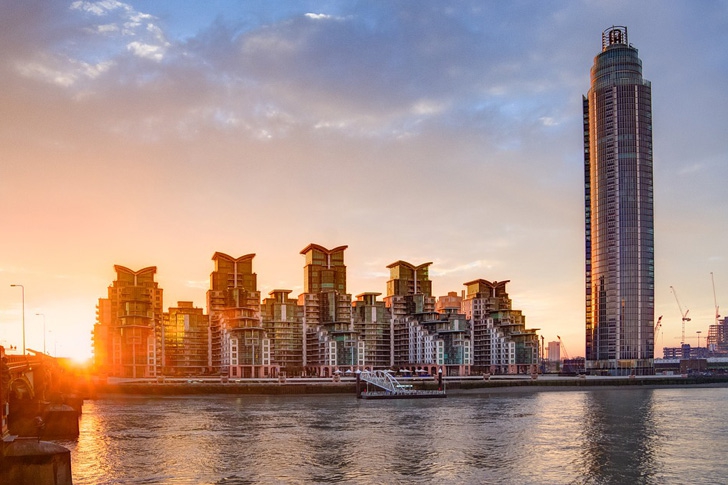 ‘THE TOWER,’ a 50-storey luxury apartment complex in central London, is alleged to be mostly foreign-owned as two-thirds of the high-rise building is owned by wealthy foreign nationals, amongst whom are purportedly a Russian billionaire, a former Nigerian government minister and tycoons of various nationalities.

The properties in the St George Wharf tower complex are incredibly expensive, with many thought to be held through offshore firms. In total, there are more than 130 buyers owning the skyscraper, which is the tallest residential building in Britain.

The under-occupied building has 214 apartments over 50 floors, and prices are in the millions. The five-storey penthouse in the tower is valued at approximately €67 million, and is allegedly owned by the family of a former Russian senator.

The tower is an excellent anti-example of current housing shortages, with the tower penthouse, at 23,000 square feet, being a massive 24 times larger than the average new three-bedroom home in the UK.  Needless to mention, there is no affordable housing in the actual skyscraper.

New London mayor, Sadiq Khan, has been noted to say that he would consider implementing policies that would ensure new homes could only be sold to UK residents in the first six months of the selling process; “There is no point in building homes if they are bought by investors in the Middle East and Asia,” he stated earlier in May, “I don’t want homes being left empty.”

Despite some criticism from David Cameron regarding the foreign ownership of high-value properties in London, brought specifically through anonymous offshore companies, a spokesperson for the development countered the criticism, “Although some homes in the tower have overseas owners, it is wrong to suggest that foreign owners dominate the London market. Savills estimated that in 2013-14, non-resident overseas investors accounted for just 7 per cent of the London residential market.”

Apparently, the overall tower development does also include 30 per cent affordable housing, with 389 units available in the neighbouring block. The developers have added that the luxurious spa and gym facilities, as well as the exclusive concierge service available at the tower, appeal and are actually available to both foreign and UK buyers alike.

Here, it seems, potential ownership depends on bank accounts, rather than passports.