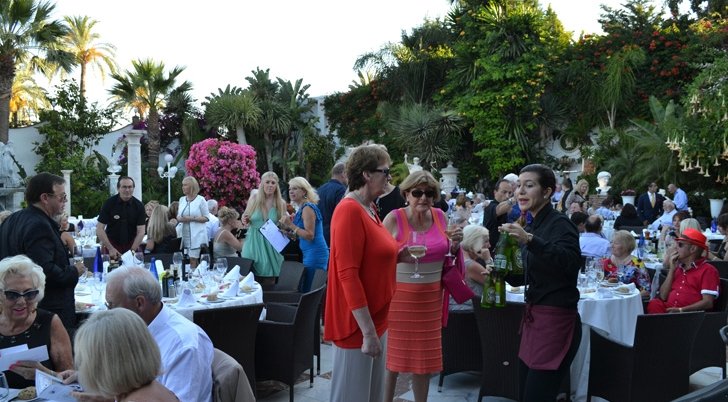 A scene from the Spring to Summer Ball

THE Villa Tiberio in Marbella has welcomed many important guests to its unique setting over the years but on Sunday, June 12, owner Sandro Morelli was almost in tears as he formally opened the Spring to Summer Ball, the ninth he has hosted, to raise funds for Children with Cancer UK.

Catering for more than 200 people seems to come easily to the well-trained kitchen and serving staff of this much respected restaurant and there was an unprecedented number of special musical guests who gave up their busy time to fly over to add their contribution to such a worthy cause. Founder of the charity John O’Gorman, who lost two children to cancer within nine months of each other attended with other representatives of the charity, both from the UK and Spain, to explain not only why he had founded it but how it had developed in association with Great Ormond Street Hospital and with no financial help from the government had managed to improve the chances of recovery for a child from Leukaemia to 92 per cent.

One of the many guests at the ball was well-known songwriter and TV personality Tony Hatch who with his wife Maggie had come over especially from Menorca to add his support to the evening. Sandro spoke to Euro Weekly News during the evening explaining that he was passionately committed to helping to raise funds and awareness of cancer in children and that before this, the ninth ball, his evenings had raised over €350,000 for the charity and he had his eyes set on another record evening to help those who are so much in need.

For him, every child saved is a child who has the possibility to grow up to become the next Albert Einstein or Mother Teresa and he feels that it is his duty to do what he can to help children with cancer.

All in all, it was yet another fantastic evening set in the gardens of restaurant which are surrounded by fountains and statues. There was so much goodwill and those who attended were more than happy to dig deeply into their pockets to help this vital research.