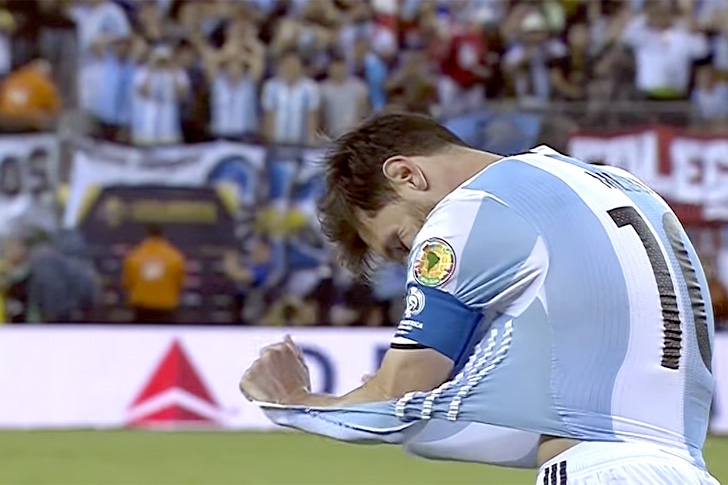 LIONEL Messi has announced his retirement from international football after losing his fourth major international final with Argentina after Chile won the Copa America on penalties.

The captain and Barcelona superstar smashed his spot-kick over the bar as Chile won the shootout 4-2 and condemned Argentina to stretch their trophy-less run to 23 years.

“In the dressing room I thought that this is the end for me with the national team, it’s not for me. That’s the way I feel right now, it’s a huge sadness once again and I missed the penalty that was so important” said the desolate 29-year-old.

“I tried so hard to be a champion with Argentina. But it didn’t happen. I couldn’t do it. I think it’s best for everyone, for me and for many people who want it. The choice for me is over, it is a decision. I tried many times but did not.”

Despite being his country’s leading scorer of all time, surpassing Gabriel Batistuta’s 54 goals with a sublime free-kick against the United States, Messi hasn’t captured his countrymen’s imagination in quite the same way as the idolised Maradona.

Playing four finals for the national team, three Copa Americas and one World Cup, Messi has seen his team fail each time and has been unable to replicate the Hand of God’s 1986 heroics.

Should Messi be serious in his decision, and he certainly seems to be, the national team will in real trouble, with Manchester City striker Sergio Aguero also registering his discontent.

“The likelihood is that Messi is not the only one that will leave the national team. There are several players like me that are evaluating whether or not to continue” he said.

One doesn’t want to think about it but at times, there are things that happen and the thought of retiring comes into your mind. Afterwards, it’s difficult to get it out. Unfortunately, the one that leaves most affected is Leo Messi after his penalty miss. This is the worst that I’ve seen him in the changing room. We are all affected and we will try to think about something else and move forward. Again, luck was not on our side.”