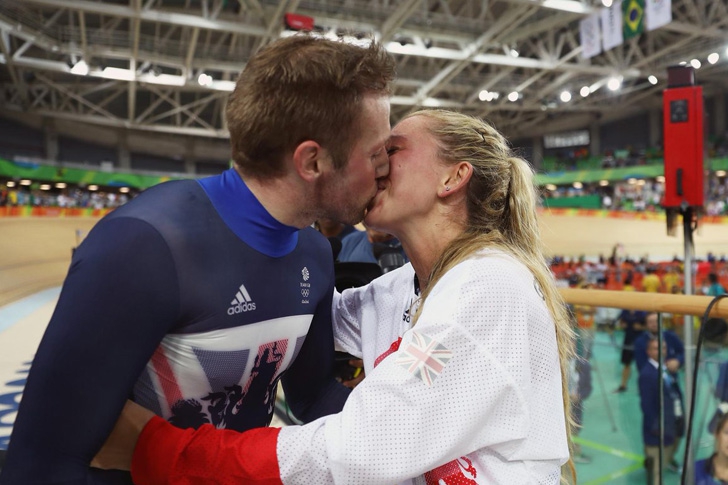 KENNY AND TROTT: The incredible pair now have ten Olympic golds between them.

LAURA TROTT and Jason Kenny are to marry in September, and both collected superb gold medals on yet another winning day for Team GB at the Rio Olympics.

Trott became the most successful female Olympian in British sporting history as she picked up her fourth gold medal by winning the omnium, destroying the field in the process as she finished the six-discipline event with a tactically perfect points race, closing down attacks and picking up points in the sprints.

The diminutive rider has now won all four of the Olympic events that she has entered, and after the race she broke down in tears as she said: “To do what I did in London and to come here and do it again, honestly I cannot believe it.

“When you see people who I idolise backing up in successive Olympics, like Sir Chris Hoy and my fiance Jason, I wondered how on earth these people do it. So for me to be able to come here and do it just makes me feel so proud.”

Her other half Kenny also had plenty to smile about, as he matched Hoy’s record of six Olympic golds with a win in the keirin to add to his victories in the team and individual sprints.

“It is pretty mental [matching Sir Chris Hoy],” said Kenny. “I was there in Beijing and knew he was special and as the years have gone by I appreciate how amazing he was then.

“To do the same is amazing.”

As the medals continued to pour in, Giles Scott nabbed gold in sailing’s Finn class for Team GB’s fifth successive win in the event, as the 29-year-old finally stepped out of the shadow of the great Ben Ainslie.

“It’s not sunk in yet,” he admitted afterwards.

“It’s so hard to describe it. You work so hard for so long for just one week in your life.”

Elsewhere, Jack Laugher won silver in the men’s individual three metre springboard final, six days after he claimed gold in the synchronised event with Chris Mears, following a skin-of-the-teeth semi-final in which he finished in the 12th and final qualifying position.

Back in the velodrome, Becky James won her second silver medal of these games in the women’s individual sprint, while Katy Marchant snatched bronze in the same event, meaning that all of Britain’s 10 riders have picked up at least one medal.

On yet another record-breaking day on which Team GB won nine medals in total, there were further bronzes for Joshua Buatsi in the men’s light-heavyweight boxing, Nile Wilson in the men’s gymnastics high bar and 16-year-old amy Tinkler, the youngest member of the entire British contingent, in the women’s floor final.

The medal rush meant Britain retained second place in the medal table ahead of China, with the team now having collected an impressive 19 golds and 50 medals overall, as UK Sport’s medal target of 48 was oblilterated with five full days of competition to go.