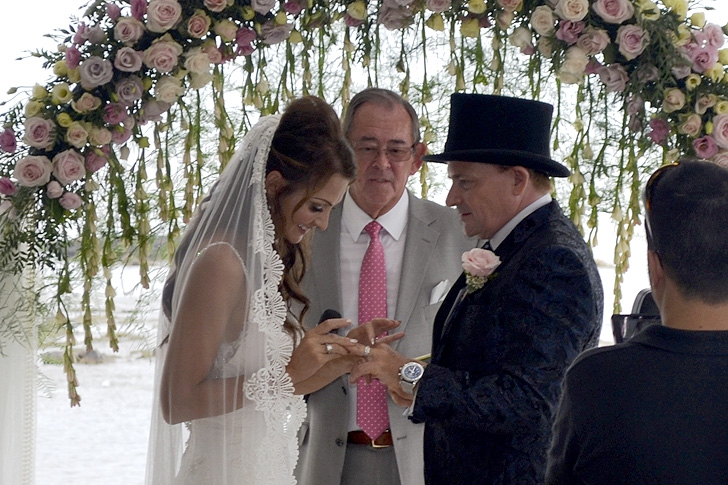 ALTHOUGH the sun wasn’t shining too brightly, the smiles on the faces of celebrity chef Steven Saunders and his partner Michele Bertinato lit up the room, as the pair who run the highly successful Little Geranium restaurant in La Cala de Mijas were married at El Oceano Hotel on Monday September 19.

The owners of Euro Weekly News Michel and Steven Euesden were invited to attend the very exclusive ceremony which saw just 40 close friends and family watch the happy couple married by Kevin Williams, the official celebrant from Mijas, and to join them in a gourmet lunch organised by John and Lorraine Palmer owners of the hotel.

In the event, only Steven was able to attend as Michel was unwell, but there is no doubt that all were delighted to be able to share this event with such a delightful couple, and a number of hotel residents and even people walking along the beach front also stopped to witness the ceremony and to cheer them on.

The two Stevens with Michele

Michele looked stunning in a beautiful figure hugging white dress with long train which fitted her like a glove, as she was given away by her father Maurice Bertinato whilst Steven was elegant in top hat and very impressive two piece suit.

Two beautiful flower girls Maggie and Helena (Steven’s goddaughter) scattered petals as the maid of honour Hayley Martin lead bridesmaids Serena and Stefanie Saunders and the bride through the hotel to an arch made of freshest flowers which formed a backdrop to the ceremony.

This was a real day of family, with the bride’s brother Brett and sister Catherine in attendance as well as the grooms father David and brother Stuart whilst the best man David Thomson gave a very well received reading of a poem about marriage.

After the ceremony, the guests adjourned to the pool bar in order to formally congratulate the couple and then they moved to the restaurant to enjoy lunch before taking a rest prior tothe evening celebration to which many additional guests were invited.