Solving the enigmas of Roswell 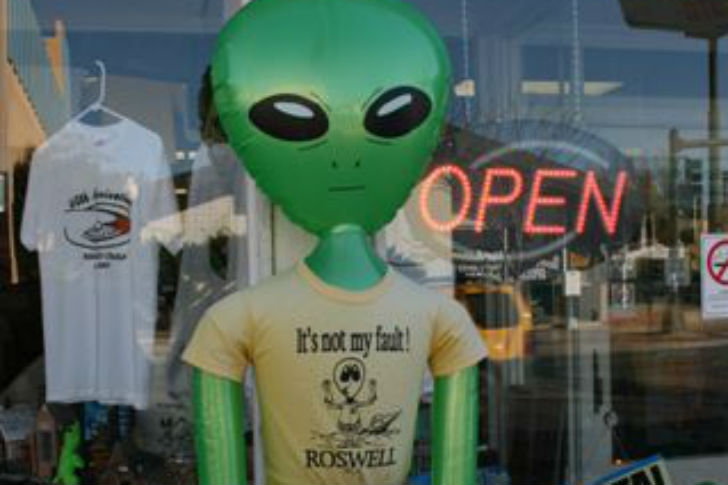 I HAVE never taken for granted my stay in this world would last forever.

Once you’ve survived to the age of 30 you soon realize that therein still remain lots of life’s mysteries to be solved. But, sometimes personal circumstances land one just on the threshold or some of those doors that needed opening.

So it came about on one of my November road trips to the southwest of America with brother Kevin. This journey was specifically to the town where the clovis-headed spear points were found.

They weren’t as important as their approximation to the next pivotal star-dot on the expedition – Roswell, New Mexico. The hallmark spot on this earth wherein the extra-terrestrial legend began. The crash site in July of 1947 jolted a slumbering nation into possibly thinking that all wasn’t really as easy as the American Disneyland way of life.

This quiet town deserves to be on everyone’s bucket list just from the fact that they know they are the world’s capital for the strange and bizarre. The entire town cashes in on its sensationalized notoriety.

Every store sells something of an Alien reference, “out of this world burgers” to invisible candies sold by the bucket.

Even the streetlights are moulded in a special way connoting alien heads with large slanted almond-shaped eyes. Both locals and visitors don’t hesitate to parade about in costumes muttering unheard of languages. It’s Halloween every day of the year. God only knows how they adorn themselves for Christmas?

And just when you think you’re ready to bail out of the kookiest town in east New Mexico you meet a tall-hatted Texan member of Roswell’s famous Cattleman’s club, which makes the TV series Dallas look common and down market.

Being from Spain I easily talked my way in and did a table-hopping survey wherein everyone questioned believed that Aliens did in fact crash nearby and all the rest was a cover-up.

Although I believed the whole scenario one big cover-up to begin with, further reasons have surfaced lately that make the incident more compelling to believe: one, the man sent down from Washington DC in 1947 to explain the situation as an errant weather balloon was none other than the secretary of the army. Damn high up for a floating piece of transparent plastic. Two, over the past 10 years high up officials concerned have made death-bed confessions swearing to the authenticity of their recantations. Too many to discount as a numerical aberration. THREE other books have made the early much more commonsense argument concerning the recent explosion of electrical gadgetry that swamped the markets for the past 50 years. Back in my youth the radios were as big as fireplaces. Now because of  “reverse engineering“ new versions started immediately appearing on the market the size of hand-held transistor radios. Innovations out of nowhere. Then, major rockets started being tested and getting ready for Space exploration.