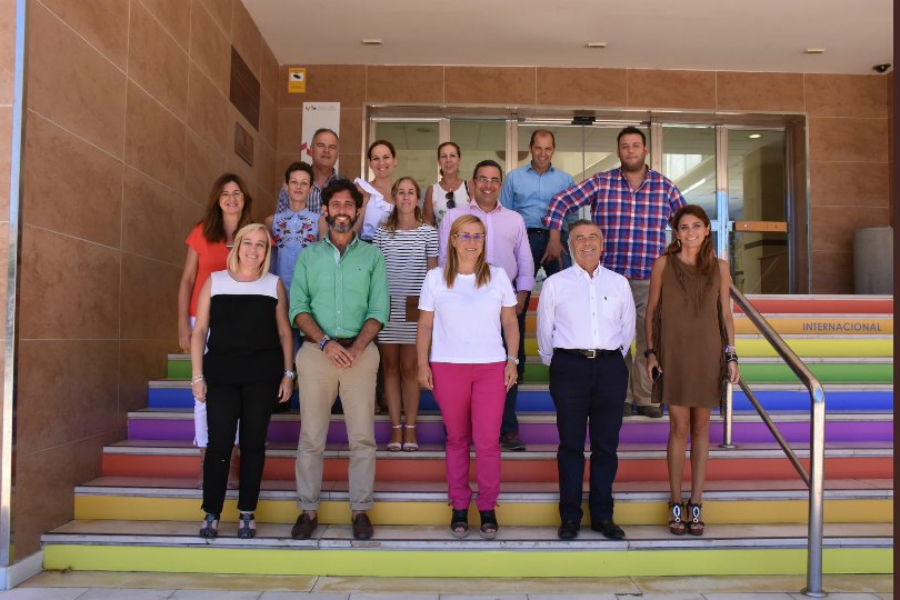 The photo causing the outrage

FUENGIROLA council has been forced to make an embarrassing apology after a senior councillor made an obscene gesture during an official photo session for World LGBTIQ Pride Day.

It comes as the smiling Partido Popular (PP) council team posed on the town hall steps, which have been painted in rainbow colours to mark the event, with youth councillor Pedro Vega appearing to stroke the genitals of his infrastructure and beaches counterpart Jose Sanchez.

In the resultant photo, a smirking Vega is seen with his arm extended as a grimacing Sanchez thrusts his groin towards his colleague’s outstretched fingers.

The image was published online to widespread condemnation from opposition parties and LGBTIQ groups.

A zoomed in version of the picture. ©Ayuntamiento de Fuegirola

Jose Miguel Lopez of the left-wing Izquierda Unida coalition said: “Once again, Mr Vega has demonstrated how little respect he has for the LGBTI [sic] collective.”

Ciudadanos spokesman Javier Toro added that the incident confirms “the contempt that in reality the PP has in terms of sexual diversity and those who think outside the stereotype which has been shown by Mr Vega himself.”

Javier Garcia Leon, leader of the socialist PSOE party in Fuengirola, joined the debate as he said: “Pedro Vega is the same councillor who made racist jokes about gypsies and now social diversity.

Mr Vega sparked outrage and accusations of racism in 2012 when he tweeted a play on words joke about a gypsy’s favourite games console belonging to someone else.

He later defended himself, tweeting: “I am not racist, I have friends of all nationalities, races, and sex.”

Mayoress Ana Mula reacted quickly on her Twitter account, claiming that the pair were making a joke about an unspecified issue not related to LGBTQI Pride.

She later released a personal statement apologising for the incident, which was captioned: “This regrettable error has not broken my commitment to the LGBTIQ collective, which I have demonstrated on many occasions. I will continue to support it. My apologies.”