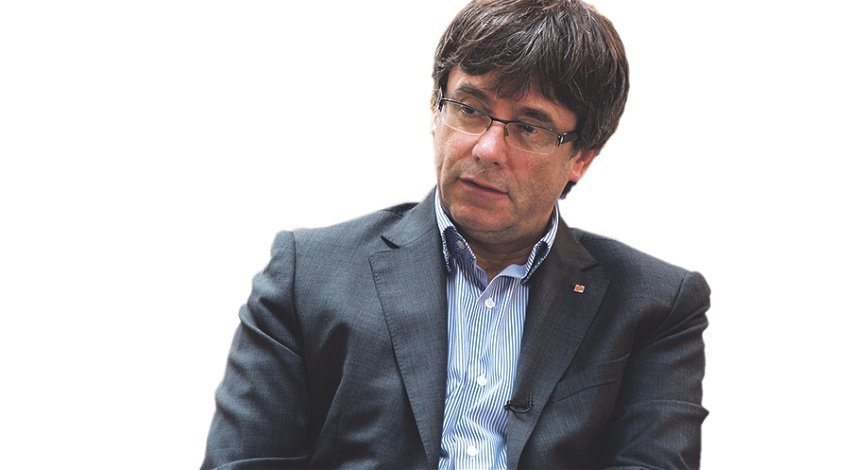 CARLES PUIGDEMONT, who dissembled for nearly a month, declared Catalan independence in a farcical vote in a half-empty parliament chamber.

Seventy pro-independence MPs were considered sufficient for UDI although changes to the region’s electoral laws or the Statute of Autonomy require approval from 90.

Vice-president Soraya Saenz de Santamaria, Mariano Rajoy’s right-hand woman and not the best-loved member of his government, will oversee the day-to-day running of the region.

Anything can happen between now and the elections. And anti-system CUP plus Asamblea Nacional Catalana (ANC) and Omnium – obsessively separatist associations whose leaders are remanded for sedition – will want to ensure that it does.

They praised their ease in reaching Raul Romeva, the Generalitat Catalan’s Foreign Affairs chief and even the regional president Carles Puigdemont.

Getting a Madrid government spokesman to make a live public statement was virtually impossible, they lamented, and they are used to getting nothing specific or a sermon about the Catholic Monarchs at Moncloa press conferences.

Little wonder the sympathies of the international media lie with poor little Cataluña, trampled under the hoofs of the raging Spanish bull and tossed on its cruel horns.

No matter that Carles Puigdemont, Oriol Junqueras and Anna Gabriel have done more to undermine democracy in their own region than anyone since Franco.  That’s good PR for you.

ANTONIO TAJANI, president of the European Parliament, said that it is not Europe’s job to mediate over a Spanish region.

Mariano Rajoy should have tried that years ago but instead he and his government made a pig’s ear of the Catalan issue.  It started as a problem in 2010 when the Constitutional Tribunal overturned Cataluña’s amended Statute at the Partido Popular’s behest.  Independence gathered momentum after 2012 and in 2017 ended in crisis and the Constitution’s Article 155.

Unfortunately for Spain and Cataluña, Mariano Rajoy’s brand of dialogue might be a monologue but Puigdemont’s version was permission for independence.

NO-ONE is taking much notice of Podemos party supremo Pablo Iglesias whose nose is out of joint and ponytail all awry. A recent opinion poll showed Podemos trailing behind Ciudadanos as well as the PP and PSOE.  That’s because Iglesias is having a tough time satisfying secessionists Cataluña and placating them outside.

And Iglesias repeatedly makes the mistake of putting voter gratification above policy.

Raking up the past

PABLO CASADO remarked that Carles Puigdemont could end up like Lluis Companys, the Catalan president executed by Franco’s government in 1940 after the Gestapo returned him from occupied France.

Casado is the Partido Popular’s Communications vice-secretary and as usual with politicians whose mouths run away with them, he immediately insisted that he hadn’t meant that at all.

But Casado’s original statement reeked of Spanish nationalism whose epicentre is based in Madrid.  Despite the secessionists’ provocation and disregard for law and democracy, this attitude is partly responsible for the escalation of the Catalan crisis and Mariano Rajoy’s inability to do anything other than get out the rulebook and read it to the Catalans.