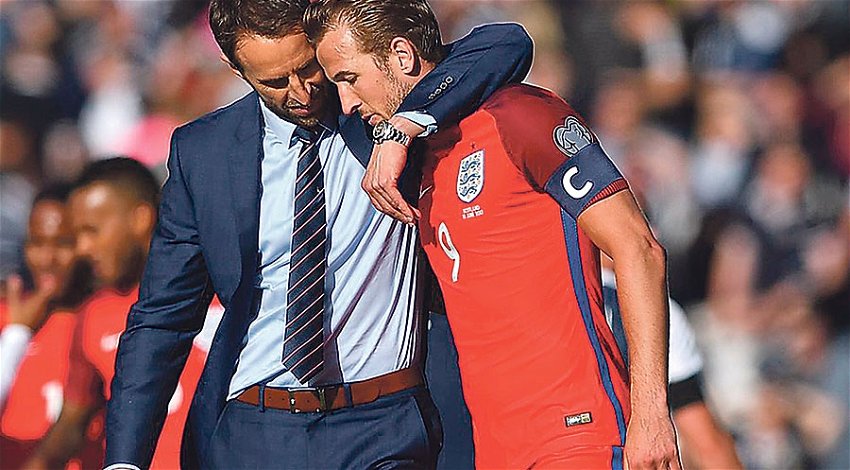 HARRY KANE: One player who has surely got his England passport stamped for Russia

THE 2018 World Cup Group draw is set to take place in the Kremlin Palace, Moscow, Russia, with England’s Three Lions set to roar.

The 32 teams playing at 12 venues in 11 different cities that go head-to-head during June 14-July 15, 2018, will be split into four pots, based on their current FIFA world rankings. Pot 1 contains Russia and the highest-ranked seven teams.

The December 1 draw will divide the 32 teams into eight groups of four, from A to H. Each group will play three matches, before the top two countries advance to the second round. Russia are in Group A as host nation.

England meet Italy and Holland in friendlies in March, prior to manager Gareth Southgate naming his final 23-man squad: “The team are getting clearer messages in how we want to play,” said Southgate.

“Playing for England is different from that at club level and one of the key things we have to continue to work at,” said Southgate.

There will be players ‘missing out’ in the England 23, with Daniel Sturridge, dropped in the friendly internationals against Germany and Brazil, desperate to return to the fold.

Liverpool outcast Sturridge, 28, in the cold at Anfield under manager Jurgen Klopp, is among a plethora of players that could miss the cut.

Sturridge could miss out, with Liverpool teammate Dominic Solanke, 20, getting the nod after his surprise call up to the England squad.

“We assess who can take us forward – that’s the challenge for all the players – you have to be playing well enough to get into the squad,” said Southgate.

Klopp, ahead of Liverpool’s Premier League game at Brighton on Saturday, said: “Solanke will be a future player for England, 100 per cent.

“Apart from his football skills, his character is absolutely outstanding. He is completely calm and doing so well, but doesn’t feel like ‘roll out the red carpet’; he is a smart lad.”

Chelsea duo Ruben Loftus-Cheek, 21, and Tammy Abraham, 20, on loan at Crystal Palace and Swansea, respectively, are among new blood, alongside Solanke, brought in by Southgate.

“Ruben and Tammy are two really good young players – the future for Chelsea,” said Blues boss Antonio Conte, ahead of the Blues fixture against Newcastle on Saturday.

Two players who have surely got their England passports stamped for Russia are Phil Jones and Harry Kane: “Phil Jones has got the pace and the reading of the game at a relatively young age.

“He competes well and it’s clear what he brings to the team. Harry’s finishing is top quality, as good as anyone, we’re fortunate to have him,” said Southgate.