What are they thinking? 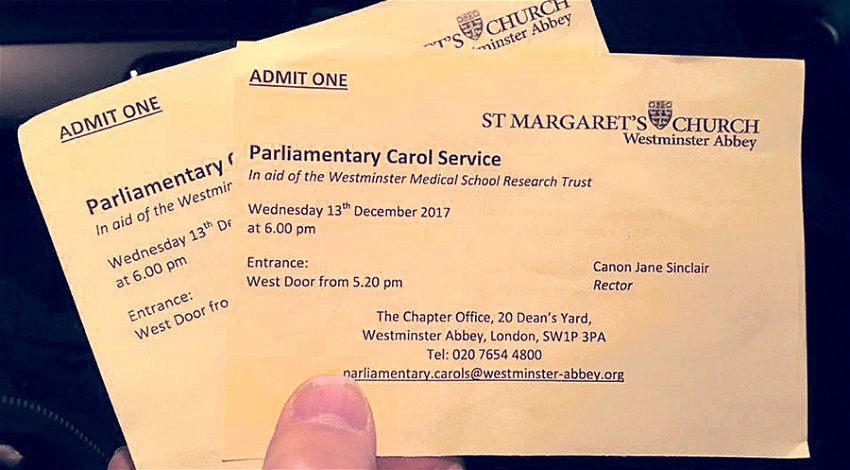 TICKETS: The only thing that was checked.

DELIGHTED to have been invited to attend the Westminster Parliamentary Carol Service last week. Not quite so impressed with the almost unbelievable lack of security which surrounded the event.

Don’t they ever learn anything? Just two minutes from the terrorist attack on Westminster Bridge, and with half the cabinet, plus Jeremy Corbyn expected to be in attendance, we walked from our traffic-jammed Uber to the church, without observing even one member of the security forces – let alone an armed officer.

Our tickets could have been run up on anyone’s PC and, although asked to bring our passports, they were not requested and we were allowed to pass unchallenged into the building, with no search, no metal detection and the briefest of ticket scrutiny. We took our seats among the MPs and peers of the realm, clutching an unchecked bag and umbrella, with yours truly wearing a long raincoat, which could have concealed a bomb or an AK47.

Frankly, I don’t care if we were closely examined by a whole truck load of CCTV cameras, had I been a terrorist, I could have taken out half of those in attendance before any security force could even have raised a small Glock. It was actually quite disturbing, and I truly did feel vulnerable in a situation which should have been sewed up tighter than the duck’s proverbial. What are these people thinking?

I was actually surprised to see Corbyn in attendance at all (May sent a representative, obviously Brexit negotiations more important than her catching a glimpse of Leapy!) I didn’t think the Labour leader ‘did’ religion; I was therefore not surprised to see him leave before the prayer segment of the service. Speaker John Bercow smiled as he passed my pew, he obviously doesn’t read the column! All in all, apart from the feelings of vulnerability, a wholly interesting and enjoyable event in a church which is steeped in historical occurrences, including the marriage of Winston Churchill and Lord Louis Mountbatten.

The same building in 1555 AD, witnessed a priest attacked at the altar, after which the perpetrator, a William Flower was burnt at the stake outside the church. (Perhaps it is a good thing they haven’t actually read Leapy’s blurb!) The Westminster choir were of course superb and fair caused many a droplet and lump. A truly unforgettable and wholly unique experience. This was the lesson read by the Speaker of the House, which made quite a pleasant change from ‘Order Order.’

This was the moment when before turned into after, and the future’s un-invented time keepers presented arms.

This was the moment when nothing happened. Only dull peace sprawled boringly over the earth.

This was the moment when even energetic Romans could find nothing better to do than counting heads in remote provinces.

And this was the moment when a few farm workers and three members of an obscure Persian sect walked haphazard by starlight, straight into the Kingdom of heaven.