If Nigel Farage is calling for a second referendum, it’s time for a rethink 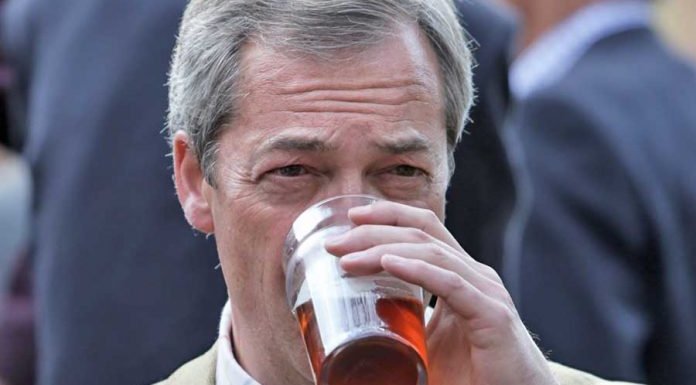 THERE’S a great satire out at the moment called ‘War Machine’. Brad Pitt plays an overzealous American general brought in to win the US war in Afghanistan. Pitt’s character, Glen McMahon, quickly finds that while his intentions are noble, the situation entirely unwinnable.
The character is a fictionalised composite of the real-life figures behind the US war in Afghanistan, but there’s a universal truth at the heart of the film:
“There are two types of generals in the American military. There are those who believe they can win in the face of all evidence to the contrary. And there are those who know they can’t. Unfortunately for the world, it’s the believers who climb to the top of the ladder.”
Such was the thinking behind Nigel Farage’s surprise revelation that “maybe” there should be a second Brexit referendum to put the issue to bed for a generation. In his mind, the Cleggs, the Blairs and the general ‘Remoan’ argument will probably not go away otherwise.
There’s a logic to this – much like with Scottish independence, Nicola Sturgeon has played for time and flirted with the idea of a second vote. Eventually, the lay of the land will have altered so much that she will have to play her hand and call for a second referendum or, to borrow from Sir John Major, ‘put up or shut up’.
Farage, even in victory, has the same problem. The Leave vote may have prevailed, but there’s an even greater ambiguity about what leaving the European Union means. Largely fruitless negotiations with Brussels, endless UK Cabinet spats about the nature EU withdrawal and the unknown consequences of Brexit itself all warrant another vote.
For Leavers, they won, and thrive or be damned, leave is what they’ll do. Remainers, even although the vote was not what they wanted, generally tend to favour democratic scrutiny and giving the voters a final say on the final settlement with Brussels.
There’s an argument that Britain elected Theresa May’s government on a Leave platform. The problem is there was nothing in the Tory manifesto to articulate what the terms of leaving would bar rhetoric about ensuring the best deal for Britain. To most observers, this seems a statement of the obvious (presumably no government would go out of their way to get a bad deal). There’s an obvious democratic deficit in the UK Government’s mandate to negotiate and execute a final deal with no national plebiscite.
What even the most devout Brexiteer must admit is that had there been a Remain victory, they would have demanded a consultation on any renegotiated deal for Britain’s EU membership. There would unquestionably be hell to pay had a government bulldozed proposals through that were radically different or had far-reaching implications for original promises.
If Nigel Farage admits the issue should be put to bed, it’s important to understand why that is. A democratic mandate must be granted to the pledges of a government so it can act. This can only be done at the final stage of negotiations when a clear package of proposals can be approved or disapproved. A referendum is only half the battle, and if May’s government is to act with purpose and conviction it should call another general election when the final settlement is clear and on the table.
At the very least, if no political party is willing to grab the thistle and hold a general election on the merits of these specific proposals, whatever they may be, then a second referendum must surely be called. Then, and only then, will the issue be put to bed for a generation.