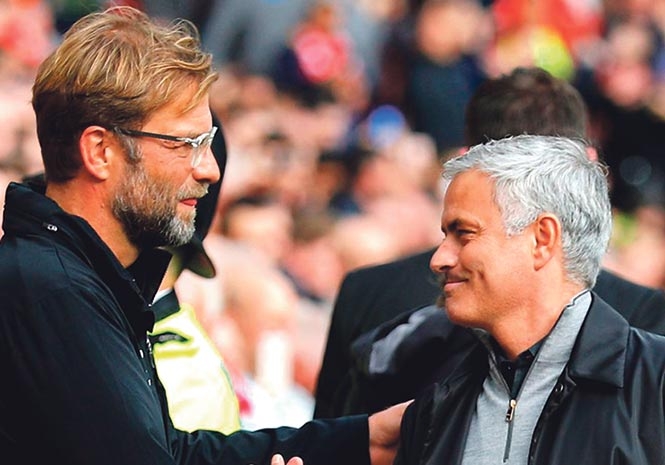 MANCHESTER UNITED will look to continue their good run of form as they host red-hot Liverpool on Saturday in a match that may determine second place in the Premier League.

Second placed United produced a stunning comeback on Monday as they came from 2-0 down to secure a last-gasp 3-2 victory thanks to Nemanja Matic’s world class winner.

While Manchester City continue their march towards the Premier League title, the race for second is still very much in the balance, with bitter rivals United and Liverpool both in the hunt, with Tottenham right on their tails.

After returning to second, following their dramatic win over Crystal Palace, another win on Saturday for United would see them move five points clear with just eight games left to play, but they will undoubtedly have one eye on Tuesday’s second leg Champions League fixture against Sevilla at Old Trafford, having drawn 0-0 in Andalucia two weeks ago.

Fourth placed will look to keep up the pressure on their north-west rivals as they head to Bournemouth.

Bournemouth have lost just one in their last six but have also only won one during that time, whereas Tottenham have won four and drawn two in the same period.

Elsewhere, Arsenal will be desperate for three points as they host Watford at the Emirates on Sunday.

The Gunners play AC Milan later this evening in the Europa League Round of 16 after their fourth consecutive loss for the first time since 2002 as they went down 2-1 to Brighton on Saturday, leaving them 13 points outside the Champions League places.

Crystal Palace will look to bounce back from their second late defeat in a row to Manchester United as they head to Stamford Bridge on Saturday.

Sky Sports’ Jamie Redknapp called Chelsea’s performance a ‘crime against football’ in their 1-0 loss to Manchester City on Sunday who will look to get back to winning ways ahead of Wednesday’s trip to the Nou Camp.

On Monday, Champions-elect Manchester City head to relegation-threatened Stoke knowing that four more wins will guarantee them the title.