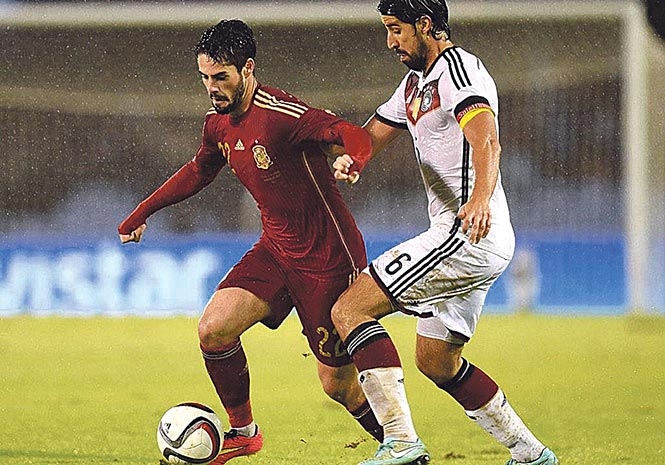 FRIENDLIES: Germany ran out 1-0 winners the last time they faced Spain in 2014.

SPAIN face a tough double header in their penultimate round of friendly fixtures ahead of this summer’s World Cup in Russia.

La Roja will head to current world champions Germany tonight (Friday), before hosting the Germans’ final opponents in 2014, Argentina, at the Wanda Metropolitano in Madrid on Tuesday.

Spain go into the matches in good spirits having not lost a match since the 2016 European Championships, but will be without front man Alvaro Morata after the Chelsea striker was left out by Julen Lopetegui.

The 25-year-old, who has struggled since his €85.7 million (£75 million) move from Real Madrid, got his first goal of 2018 in the 2-1 FA Cup quarter-final win over Leicester on Sunday but has been replaced by rejuvenated former Chelsea man Diego Costa. There were also first time call-ups for Chelsea’s Marcos Alonso, Valencia playmaker Dani Parejo and Villarreal’s Rodri.

Speaking to English media, Lopetegui was adamant that his final selection for the World Cup was far from made, but was full of praise for the newcomers in his side.

He said: “There are players who are not on the list whose chances of going to the World Cup are intact.

“We’ve now got two exciting matches against two great sides and after that everyone will have their chances. The fact players haven’t been called is down to various things; form, injuries and also to see new players better.”

“We felt it was the right time for them to come in and take a look at them.

“We like (Rodri) a lot. He’s very young but he’s ready. We’ve liked watching him a lot, the reports from his club and the under-21’s are excellent and we thought it was a good time to see him closer.”

Elsewhere, England will hope to secure two victories in their penultimate double header.

England boss Southgate’s side will be without key man Harry Kane after he was ruled out until April, as they head to the Netherlands later this evening (Friday) ahead of hosting Italy at Wembley on Tuesday.

Southgate has handed a place in the squad to three uncapped players ahead of the fixtures, all looking to state their claim for a place on the plane to the World Cup.

Burnley duo Nick Pope and James Tarkowski receive their first call-ups on the back of the club’s good form this season, alongside Swansea centre-back Alfie Mawson. Bournemouth midfielder Lewis Cook has been called up for the second time after he was originally called up for the 0-0 draw with Brazil in November.

There are also recalls for Arsenal pair Jack Wilshere and Danny Welbeck, while West Brom’s Jake Livermore also retains his place in spite of his club side’s poor form this season.

Other fixtures will see Argentina play Italy tomorrow (Friday) as well as Russia against Brazil and France take on Colombia before Portugal face the Netherlands on Monday and Germany host Brazil on Tuesday.