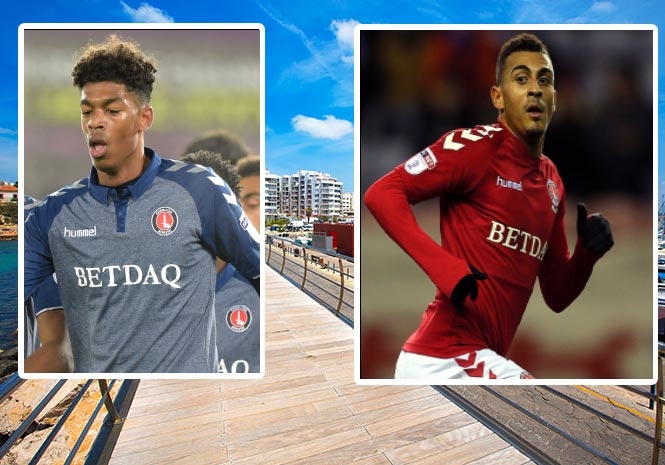 TWO men including a Charlton Athletic footballer accused of sexually assaulting a British holidaymaker in Ibiza could be forced to stay on the island for weeks.

A lawyer acting for forward Reeco Hackett-Fairchild is reportedly trying to change his bail conditions after a Spanish judge ordered him to hand over his passport.

But if the appeal fails he and fellow suspect Olusola Odejayi, 26, could face a month-long court battle as they fight to clear their names.

Hackett-Fairchild’s team mate Karlan Ahearne-Grant, 20, who was also held in the wake of the allegations, is being probed for a privacy offence but has been allowed to return to the UK.

The three were last week arrested after a 19-year-old girl’s parents told police she had been attacked in a Cala de Bou hotel near San Antonio while on a family break.

They are believed to have partied at the Ocean Beach club before meeting the unnamed teen and a female friend at a bar, inviting them back to their hotel.

Investigators were told that one of the men – later identified as Odejayi – then forced himself on the young woman while Hackett-Fairchild held her down and Ahearne-Grant filmed the scene on a mobile phone.

But it later emerged that the ‘victim’ engaged in a sex act with the player before the alleged attack, after she confessed to “kisses and sexual things” when quizzed in court.

Asked to specify what had occurred by Jaime Campaner, defending, she replied: “Oral sex.”

She then said she failed to confirm it in her initial police statement due to nerves, while the men have insisted that what occurred was consensual.

The admission came after judge Carmen Robles Zamora earlier described their version of events as “credible and coherent,” and said there exist “reasonable doubts” that a rape had taken place.

She said in a written ruling justifying her decision to grant bail: “Although the victim’s statement has credibility and was made when she was very upset, the report by the forensic doctor does not show any type of injury or even bruising on her thighs and genital area when the victim has stated she was a virgin.”

Ahearne-Grant’s phone has been sent to Madrid as police try to recover deleted videos that could prove crucial to the enquiry, and the striker must visit the Spanish Embassy in London twice per month as part of his bail conditions.

Hackett-Fairchild has made 12 appearances for Charlton, scoring twice, while Ahearne-Grant has played for the League One club 69 times, netting seven times.

A Charlton Athletic official told UK media: “The club have been made aware and are looking into this matter. Due to the ongoing investigation we will not be commenting any further at this stage.”