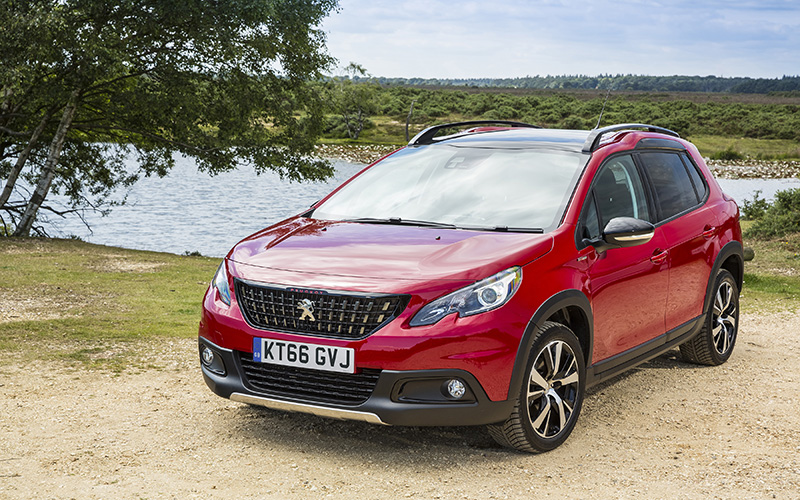 The SUV – sports utility vehicle –  has been a phenomenal success in recent years  – its higher driving position giving a greater sense of control and its rugged styling adding more visual appeal.
However, many SUVs have become more bulky over time and not everyone likes that – the bigger the car, the more difficult it may be to park, especially in cities where space is at a premium.
Thankfully, the answer is the compact SUV, a smaller version which retains much of the appearance and practicality but has a smaller footprint.
One of the stand-out models in this sector is the Peugeot 2008, based on the platform of its smaller 208 hatchback stablemate, but with a cool eye-catching design and very clever use of interior space.
Prices start at €18,564 (£16,600), there are various petrol and diesel options and one of the more popular is the 1.2 litre 3-cylinder petrol version, available with three power outputs. The model I tested, in top of the range GT Line specification, offered a zesty 130 hp. With extra features including panoramic glass roof with electric blind, reversing camera, sat-nav, smartphone mirroring connectivity and a wealth of styling accents, this model costs €23,541 (£21,050).
The wide-mouthed front grille, larger alloy wheels and sleek roof rails give it plenty of visual presence, and its performance is impressive, top speed 200 kph (124 mph) and a quick 0-100 kph time of 9.3 seconds. It scores well for economy too – 19.6 kpl (55.4 mpg) with emissions of 118 g/km.
Underway, the 2008 – just four metres long  –  is very pleasing in urban traffic, with light steering, and good agility for parking. The engine is surprising quiet for a 3-cylinder unit, the suspension is set for ride comfort and the 6-speed manual gearbox is slick and precise.
The cabin has a smart appearance with a central multi-function touch-screen dominating the dashboard  and there is also a Peugeot quirk – you look over the steering wheel to see the instrumentation  rather than through it. This is fine for normal size drivers but shorter drivers may sometimes find their view of the dials slightly compromised.
Cabin space accommodates four adults easily and the boot holds 422 litres, expandable to 1,400 litres by dropping the rear seats flat which is done with just the touch of a button.
Rivals in the compact SUV sector include the  Nissan Juke, Renault Captur and Kia Soul, but in my view the Peugeot 2008 has a distinct edge when it comes to elegance and visual panache.
Model tested is UK-specification and equipment levels and prices may vary in other markets.
Stats panel:
Model: Peugeot 2008 GT Line
Engine: 1.2 litre petrol
Transmission: 6-speed manual
Performance: 0-100 kph 9.3 seconds, top speed 200 kph (124 mph)
Economy: 19.6 kpl (55.4 mpg)
Emissions: 118 g/km