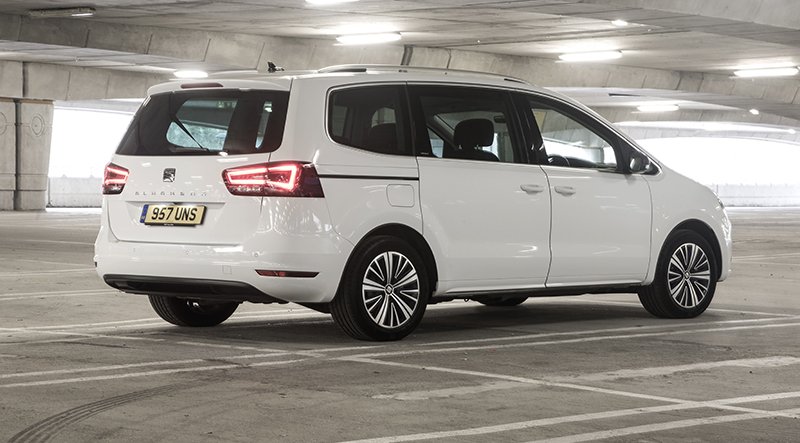 ELEGANCE: The new Alhanbra is as spacious as a palace inside. Credit: SEAT

DESPITE the relentless rise of the SUV, the demand for larger people-carriers remains solid, as there are bigger families and those with business needs where extra space is very important.
Most of the mainstream manufacturers have an MPV in their ranks, with notables including the Ford Galaxy and Volkswagen Sharan. And there is another very strong contender from the VW stable, the SEAT Alhambra.
Named after an opulent palace in Granada, Spain, the Alhambra has won several ‘Best MPV’ awards, scoring highly for its occupant and load capacity and its range of strong flexible engines. There are petrol and diesels on offer with different power outputs and with manual or auto gearboxes.
Prices start at €32,340 (£28,395) for the entry S version, but most buyers opt for models further up the range. My test model was in Xcellence trim, with a 2.0 litre diesel engine and 6 speed DSG auto gearbox. Equipment on this version, which costs €40,040 (£35,155), is extensive and includes leather upholstery, reversing camera, sat-nav, three-zone climate control, alloy wheels, roof rails, auto lights and wipers, cruise control, connectivity features and a panoramic sunroof.
The cabin is a pleasant place to be thanks to clever design which makes maximum use of the space and leave adequate room for adults even on the third row of seats. There are plenty of stowage spaces around the cabin and the boot holds 267 litres even with all seven seats in use. With all seats folded, you get a massive van-like 2,297 litres of load space.
The Alhambra has wide electrically-operated rear doors, making rear seat access easy, and very handy when in tight parking situations when there isn’t enough room to fully open a conventional door.
Underway, the 148 hp diesel unit pulls well even with seven people on board, and proves very refined. The suspension setting is nicely balanced to give composed cornering and a comfortable ride. Top speed is 198 kph (123 mph) and the 0-100 kph time is 10.3 seconds. Emissions are 137 g/km and the fuel economy very good at 19.2 kpl (54.4 mpg).
The SEAT Alhambra has elegant if slightly understated  styling and while it can be argued there are more eye-catching models in the MPV sector, rivals will find it hard to match the overall mix of space, comfort and versatility that the Alhambra offers.

Model tested was UK specification and equipment levels and prices may vary in other markets.