Letter from the Canaries – November 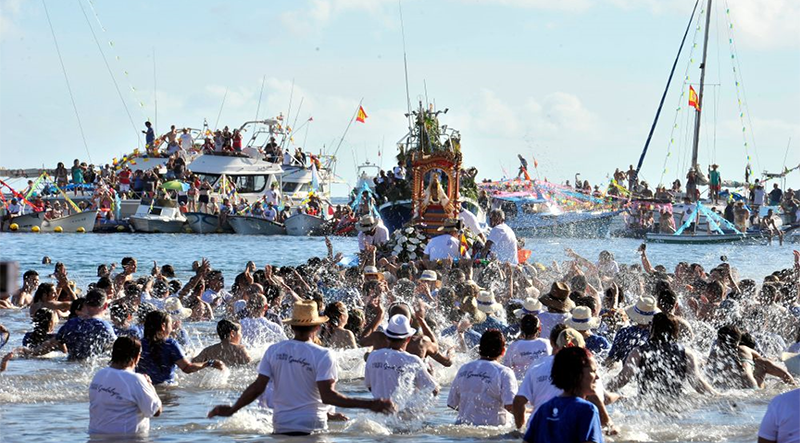 ON TOUR: The virgin is on the return journey to her chapel.

THE FIESTAS LUSTRALES in La Gomera have kept us all very busy during October.
We’re jaded now by so much partying but continuing apace till the island’s patron saint, the Virgen de Guadalupe, finally gets back to her chapel overlooking the sea at Puntallana, near island capital San Sebastián.
Have a look at www.lustraleslagomera.es to marvel at how full on we’ve been.
There’s been everything, from theatre, music concerts, maritime processions, fireworks, regattas, sports events, religious ceremonies, folklore, live TV and radio broadcasts, conferences, exhibitions, comedy shows, kids’ activities….to hunting dog competitions. Special ferries have been laid on to get us all to San Sebastián from other island ports, and from other islands.
Guadalupe’s now on tour round the island until early December, when there’s a recuperative period for the liver until Christmas, New Year and Los Reyes are upon us. Shortly after, we burst into party mode again for carnival. Island life can be demanding.
Fiestas Lustrales are the big bashes that occur (generally) every four or five years when the patron saint of an island comes out and goes on tour. They’re also called Bajadas, meaning descents. This is mountainous terrain.
All the western islands have Bajadas and coinciding with one is an intelligent idea if you’re thinking of visiting the Canaries. They are extraordinary events. Here’s a brief summary of when and where to experience them:
La Gomera’s next one’s from September to December 2023, with the big day on October 8th. The first was in 1872.
El Hierro’s Bajada has happened every four years since 1643. The next is July 3rd, 2021, when their Virgen de Los Reyes will be danced and piped the whole length of the island, although the festivities last longer.  Add this one to your bucket list. Stout footwear, something warm for the before-daybreak start and a loaded hipflask are recommended. You won’t believe your eyes! Book flights and a bed well before, as the island’s 10,000 population doubles for the Fiestas Lustrales.
La Palma’s Virgen de Las Nieves does her next four yearly tour on July 2nd. 2020 and has been doing so since 1680. There are excellent festivities throughout July and August.
Provincial capital Tenerife’s Bajadas are more complicated. The Virgen de Candelaria is patron saint of all the Canary Islands and only comes out from her church in Candelaria every seven years, going to either Santa Cruz or La Laguna. She’ll go to Santa Cruz in October 2025 and La Laguna in May 2032, exact dates to be announced. Tenerife’s first Bajada was in 1555.
Gran Canaria only very occasionally celebrates Lustrales, while Lanzarote, Fuerteventura and La Graciosa don’t at all.
Now, why don’t the eastern islands do Bajadas when the west are so mad keen on them? There’s lots of argument, but my money’s on their proximity to Africa and its diluting effect on the Catholicism Spanish conquerors imposed.
The Bajadas today, though, are also celebrations of Canarian culture and identity and well worth seeing