LETTER FROM THE CANARIES 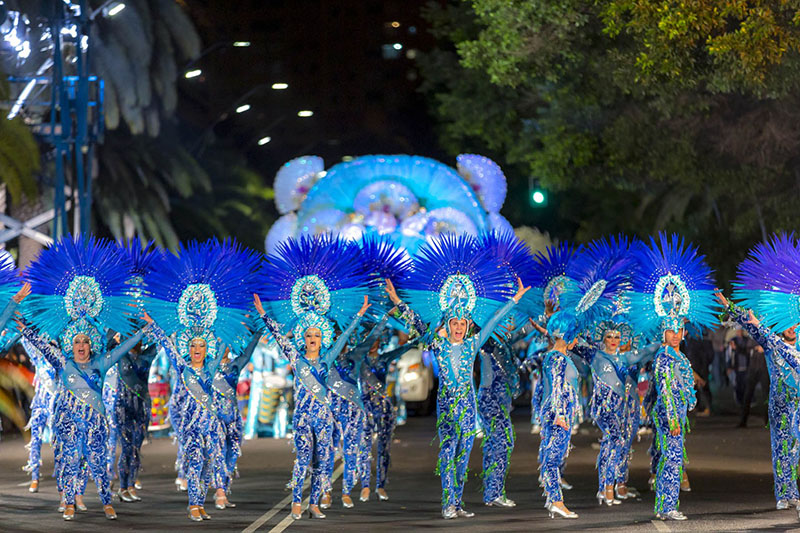 CARNIVAL: The whole city centre’s cordoned off to accommodate, wait for it… one million carnival revellers.

LADIES and gentlemen of the mainland, this month’s missive from the islands brings news of that full technicolour, acid test of hardcore staying power: the famous, anything goes, excessively indulgent, gloriously over the top event and coup-de-grace of many a liver and reputation that is the CARNAVAL EN CANARIAS!

Until I’d experienced it, Carnival was for me a High Street procession with lots of baton twirling majorettes, trade vehicle floats and kids in fancy dress. Then, shortly after coming to live here, we left La Gomera to prevent the car being snatched by the Guardia Civil for overstaying its welcome, (this was pre-EU membership, think of all the fun after Brexit!) for Tenerife capital Santa Cruz, where an ‘expert’ would solve the problem. Or so he said, but that’s another story.

I knew it was carnival but had NO idea of what that means in Tenerife. It was the Entierro de la Sardina-burial of the sardine- final day. The kids and I drove, astonished, into what looked like a city-wide performance of the Rocky Horror Show.

Everyone was in black, wailing and screaming. There were nuns, ghouls, priests, tarts, bishops, and thousands of grief-stricken, howling widows of both sexes, many with enormous plastic breasts. The death of a giant sardine had upset them badly; a mock priest eulogized to frenzied wailing.

As an ex convent girl, (but all Brits are prudes compared to the Spanish) I was thrilled, and continue to be so.

This year’s carnival in Tenerife features 19 junior and 20 adult murgas, 13 dance groups and 10 musical groups competing for best title; 24 daytime concerts; 20 ‘orchestas’ and 15 Djs and 4 reggae bands for late fun. There are Drag Queen, Junior Queen, adult Carnival Queen and elderly queen-or whatever the PC title is-competitions featuring extraordinary costumes needing wheels to move them and processions of all types.

The whole city centre’s cordoned off to accommodate, wait for it… one million carnival revellers. Big names like Juan Luis Guerra from the Dominican Republic, winner of 18 Latino Grammy awards are performing.

Puerto Rica’s Manny Manuel was programmed to appear but has been cancelled after appearing onstage on 24/2 too drunk to perform at Las Palmas de Gran Canaria’s carnival.

See https://www.youtube.com/watch?v=nInpiCVLj6A for the sorry before, after and during story and https://www.laopinion.es/carnavales/2019/02/24/carnaval-santa-cruz-tenerife-/956401.html for the intervention of Las Palmas councillor Inma Medina, who marched across stage, relieved him of the mike and threw him off after repeated attempts for help from his band were ignored.

Inma’s a big fan of Manny Manuel: “His management had to refund the money because although Manny has problems with alcohol, they should have ensured he was in a fit state. This was terrible for him, his musicians and his many Canarian fans. It should have been avoided”.

His two subsequent performances at Tenerife’s carnival were cancelled and although Gran Canaria organisers assure me his management has paid back the advance fee (on the 30.000e he charged), Tenerife’s still waiting.