So who’s a digital dummy then? 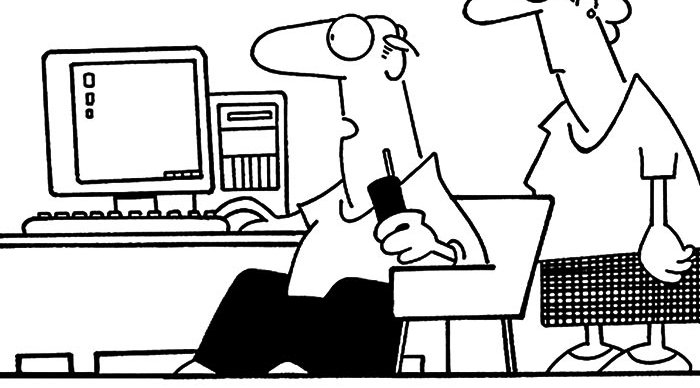 Not all of us have bridged that digital divide, warns Terence Kennedy

PRAISE the Lord and pass the ammunition, as the wartime song had it: Spain just reached 10th place in the world’s digitisation stakes. But half of us still lack basic digital skills.

First the good news: Spain knows its way around a mousepad and touchscreen far better than Germany, France or Italy. Half of all shopping searches here are made by mobile phone, though 71 per cent of the actual purchases happen on computer.

We’re avid online buyers of clothing, travel and books, and according to the EU as recently reported in this fine paper, Spain joins Ireland in having made the most progress in connectivity, human capital, use of the internet, digital integration and digital public services.

Though anyone who has tried navigating the snakes-and-ladders of Spain’s bureaucracy online may perhaps beg to differ.

The bad news is that one in five people here are not online, and one in two lack those basic digital skills. Given that most six-year-olds could reprogram a NASA space mission while playing Postman Pat, that means an awful lot of we more, um, mature people who simply don’t know our Alt key from our Enter.

And so many of us still make such elementary computing mistakes. For instance, we join the   23 million other people around the world who use 123456 as a password and then wonder why our bank accounts get hacked.

Or we compose a borderline-obscene e-mail to the object of our attraction and then a ham-fisted click sends it off to the wrong person. (Note to the local tax authority: I really didn’t mean to infer an unnatural attraction to your earlobes, honest).

At the other end of the scale are those so terrified of the internet that they miss out on all the good stuff: cheap deals online, all the world’s knowledge at our fingertips, all the cat videos you can handle, unlimited choice for everything from air-tickets to car hire to the sins of the flesh, and and and…

It does all come at a price. Those of us who have bought into this brave new digital world face problems our forefathers could not have begun to imagine.

Our attention spans are shot, we’ve forgotten how to remember telephone numbers (or indeed how to do basic maths), we text because absolutely nobody phones any more.

And we just keep falling for stuff. Beware the next time a nice man from Microsoft in India phones out of the blue to offer his kind help in sorting out a problem they detected. You have been warned. Again.

WHY are some folks so resistant to technology?

I know many who are convinced putting a credit card anywhere near a computer will get their bank accounts looted.

Older folks fall back quickly on the argument that if we all buy online, our high-street shops will disappear. They might, eventually, but that’s not our problem as we’ll be pushing up pretty daisies by then.

For them I have news: hordes of bedroom-bound teenagers are in the same boat.

At least you dear reader could surely never be as computer-illiterate as the learner who was told to press any key, but couldn’t find one labelled ‘Any key.’ Could you?