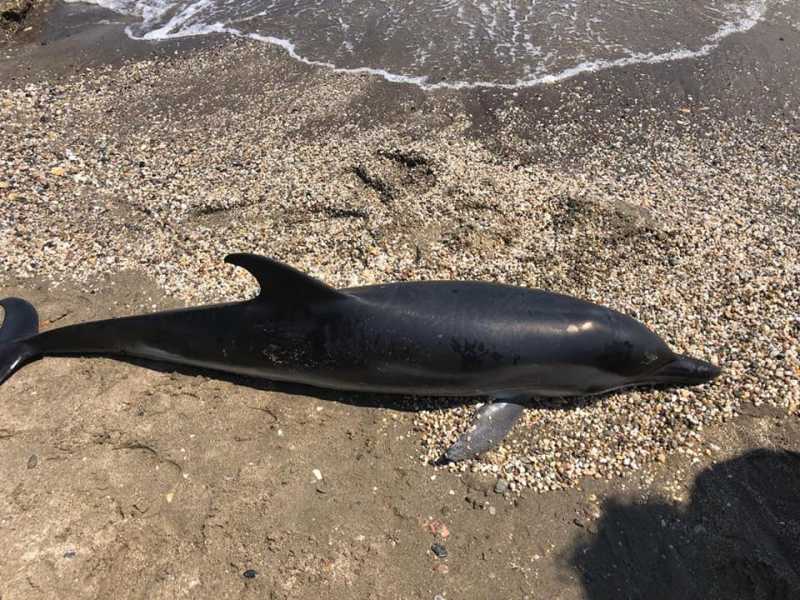 TOO LATE: Mojacar-based Equinac volunteers rushed to help the dolphin, but it had already died by the time they got to the beach. CREDIT: Equinac Facebook @asociacionequinac.org

NEVER try to put a beached dolphin or turtle back in the sea, and always immediately alert the 112 Andalucia emergency service.
That was the sharp message the Equinac Marine life rescue association put out on social media following the death of a dolphin in Mojacar on Sunday.
A beachgoer and 112 alerted the association to the beached creature at around 1.30pm. But by the time local British Equinac volunteers Alex Lawson and Adele Land got to the location just a short time later the animal was already dead.
According to Equinac people had crowded round the dolphin and tried to get it back in the water. Within minutes the creature suffered convulsions and died.
“This would be normal if it weren’t that the animal beached 50 minutes before in a nearby area, and bathers, without alerting anyone, reintroduced it on their own”, Equinac reported in a clear tone of frustration and exasperation.
The association said it had put out the warning “thousands of times” about what to do in the event of finding a beached marine creature, but added, “it seems this message has not got through to everyone.”
The post continued, “When these creatures get stranded on the beach it is because they are very sick or have a problem, hence they need to be attended to like any land animal. Because they live in the sea does not mean it’s alright to put them back.”
Equinac also pointed out they are protected species which can only be attended to by specialised, authorized personnel.
If members of the public take matters into their own hands “the animal ends up drowned and dead due to the stress of being handled by unqualified people”, the association stressed.