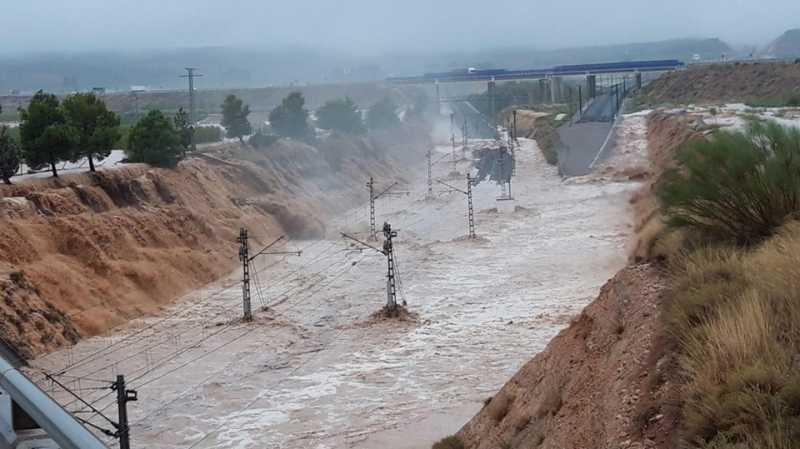 The storms have caused widespread destruction and at least two lives have been lost because of the heavy rains.

The regional emergency service have confirmed that a 51-year-old woman and her 61-year-old brother had been found dead in an overturned car that floodwaters had washed away in Caudete, about 60 miles (100km) south of Valencia.

The Valencia fire department have also informed that emergency crews rescued three people from a river, one of whom was flown to safety by a helicopter. Four police officers were injured in the rescue operation.

Thirteen people were rescued from cars or rooftops in Albacete, south-west of Valencia.

The extreme weather has caused flooding in other parts of Valencia, as well as in Murcia and Castile-La Mancha. The Clariano river in Ontinyent, a village in Valencia, has also burst its banks, requiring 40 people to be rescued and 150 evacuated from their homes. A school wall in the town has also reportedly collapsed because of the extreme weather.

The rising waters of the Ontinyent river, which rose nine metres (30ft) in two hours around the Valencia town, has destroyed a 16th-century bridge in Aielo de Malferit (Valencia).

Ontinyent’s mayor, Jorge Rodríguez, said the town had endured its heaviest rainfall on record. He said the town would ask the national government to declare a catastrophe in the area, which would entitle local people to emergency aid and long-term financial help to rebuild.

The atmospheric conditions caused a small tornado to form on Dénia’s Raset beach, in Alicante province, which ripped up trees, traffic signs and roofs and damaged the municipal sports centre. Winds of 104 kilometres per hour were recorded.

The ‘cold drop’ hit the Mediterranean area on Monday and is forecast to last until midday today (Friday).

Authorities mobilised Spain’s military emergencies unit, part of the armed forces that provides disaster relief, and people in Murcia have been warned not to drive.

Railway lines  have been inundated and RENFE has suspended trains around Almeria. Flights to the area have also been diverted.

Local schools cancelled classes for more than 300,000 students on Thursday and Friday.