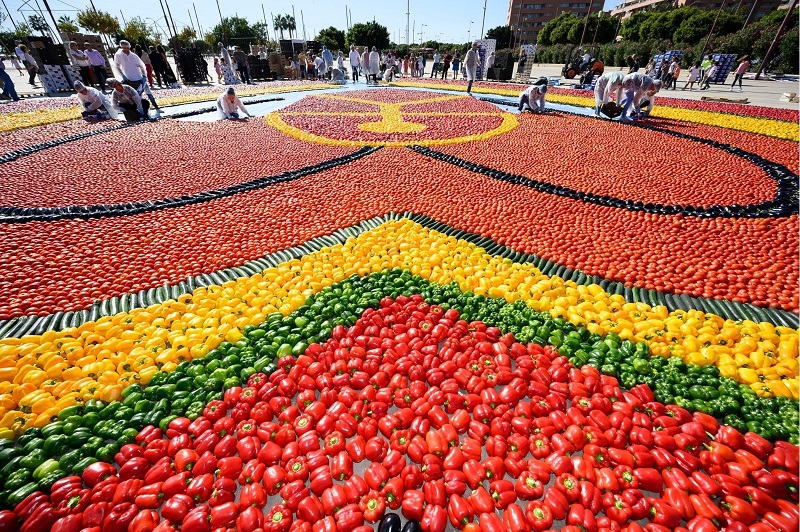 ALMERIA has gained its second Guinness World Record, this time with the largest ever heart mosaic made entirely from fruit and vegetables.

No less than 20 tonnes of provincially produced tomatoes, broccoli, peppers, aubergine, pumpkins and courgettes went into creating the 603.15sqm green heart at the municipal fairground.

It was certainly a colourful feast for the eyes when it was finished, featuring a bright yellow indalo at its centre and accompanied by the message +Salud Almeria.

Guinness World organisation official judge Anna Orford had come from London to verify Almeria’s effort had snatched the record from India, which had held the title for five years with a 480sqm heart.

Receiving the certificate on behalf of the city council and the vegetable company behind the initiative, Almeria Mayor Ramon Fernandez-Pacheco commented, “today we have once again taken a step forward in the aim of gaining renown as the gastronomic capital.”

What’s more, he said, it had been achieved with “something intrinsic to us”, which he described as the “healthy fruit of the labours of the thousands of people who work in our agro-food industry, and which makes Almeria export health to the world.”

He continued, “we have gained this record which highlights the quality of Almeria’s produce…and the innovation of our province’s agriculture under the sun.”

Fernandez-Pacheco also gave a hearty thanks to all those involved in the record-breaking initiative, and took the opportunity to underline the importance of a healthy diet, featuring fruit and veg just like those used for the giant heart.

The record-breaking fruit and veg heart attempt was staged to mark World Food Day and as part of this year’s extensive programme of Almeria 2019 Gastronomy Capital of Spain promotional events.

Fernandez-Pacheco referred to the success of the gastronomy capital status in putting Almeria on the map as a foodie tourist destination, underlining the most important factor had been “the commitment of everyone: administrations, businesses and the public.”

Back in June Almeria made it into the Guinness World Records for the biggest ever gazpacho, snatching the tile from Portugal with 9,800 litres of the cold soup.