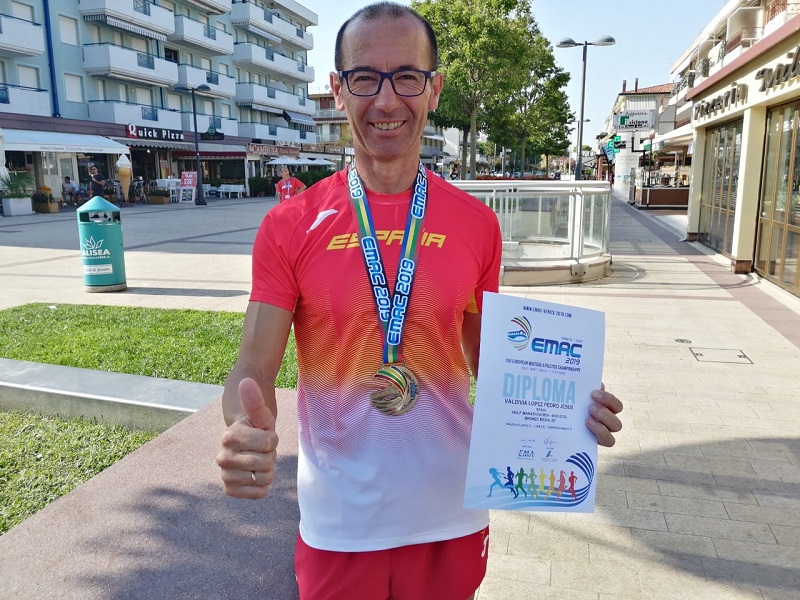 MOJACAR athlete Pedro Valdivia has won a bronze medal in the half marathon at the 21st European Athletics Master 50 Championship in Venice.
Pedro, who has lived and trained in Mojacar since 2006, was part of the Spanish national team taking part in the International Athletics Federation-organised event.
His win in Venice was by no means the first time he has stepped up onto the podium; his excellent record places him among the top athletes in his category.
Pedro runs both marathons and half marathons, and he has travelled half the world taking part in top events. For each competition he puts in more than 1,000 kms of training: if the entire distance he has ran during preparation and racing were added together it would easily take him around the world!
Pedro can often be spotted training on Mojacar’s beaches, around the Sierra de Cabrera and on other local roads and paths, adapting his training to the next challenge on the horizon under the guidance of his coach.
Coming up are the Aguilas half marathon later this month, followed by the Mojacar half marathon, after which he will begin preparing for his most important upcoming event, the Seville marathon.
Pedro was born in Almeria, but chose to settle in Mojácar as an ideal location for his sporting passion. He highlights the diversity of Mojacar for an athlete, allowing for training on different types of terrain and serving as a great outdoor circuit for runners in a wonderful environment, and suitable for any standard, from amateur to the professional elite.