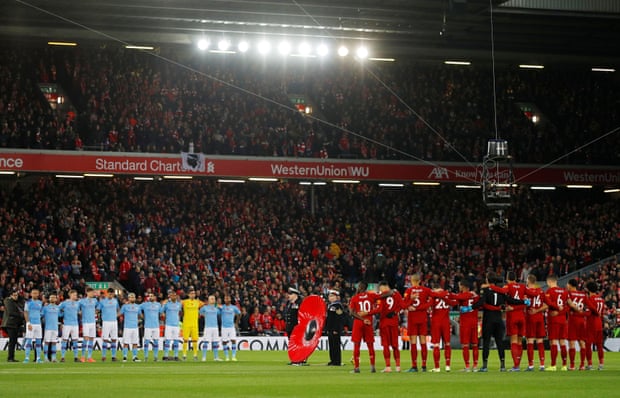 The two top premiership teams clashed at Anfield on Sunday Liverpool V Manchester City with 5 points between them at he top of the table.

It wasn’t long at all until we saw the first goal when on 6 minutes City thought they should have had a penalty for handball, after the ball flicked off Alexander-Arnold’s thigh and into his arm. The referee waved play on and  Liverpool a raid down the left. Mane’s low cross  was poked clear, but Fabinho ran onto it, took a touch and blasted it inside the post from 25 yards ensuring Liverpool a footing with a 1-0 early lead.

Just 8 minutes later though they only went  and stole a second goal when Robertson’s cross which was  a beauty, bounced to Salah, who headed it in But was he onside – the game went to VAR and it was given- giving Liverpool a great start to the match.

The last ten minutes of the first half of the game City were hilariously dominant , yet they somehow still managed to be two down , mainly because their back four were not much cop at defending.

10 minutes into the second half and Liverpool scored a third It was a gorgeous Henderson cross, and Mane stooped to head in at the back post- Bravo got two hands to it, but could only fumble it in.

City pulled a goal back on the 80th minute when Angelino’s low cross deflected to Bernardo Silva, whose low shot clipped the inside of the post on its way in.

Klopp was absolutely furious about the goal,  because he thought De Bruyne may had fouled Fabinho in the buid-up. It survived the VAR check. 3 -1 City.

The last 10 minutes Liverpool  completely lost their swagger, but they still had their lead as City threw everything at the bus but Liverpool saw it out and went 8 points clear at the top of the premiership and looking likely champions this year even at this early stage.City themselves with the loss dropped to fourth.

It was a cracking match Full-blooded, high-paced entertainment from first to last, packed with quality, an absolute neutral-thriller.

“We saw in the last 10, 15 minutes, the goal gave City momentum. In that moment, they controlled the game. The other 75 minutes, we controlled the game with our intensity. If that was easy I think a lot more teams would try it. The boys put another incredible shift in. Then you need to score goals in the right moment, and obviously that’s what we did. All three goals were incredible. Then you have to defend with all you have, and that’s what we did. I don’t know a lot of ways to beat City but if we want to do it we need to do it with intensity, forcing them to play our game if you like”