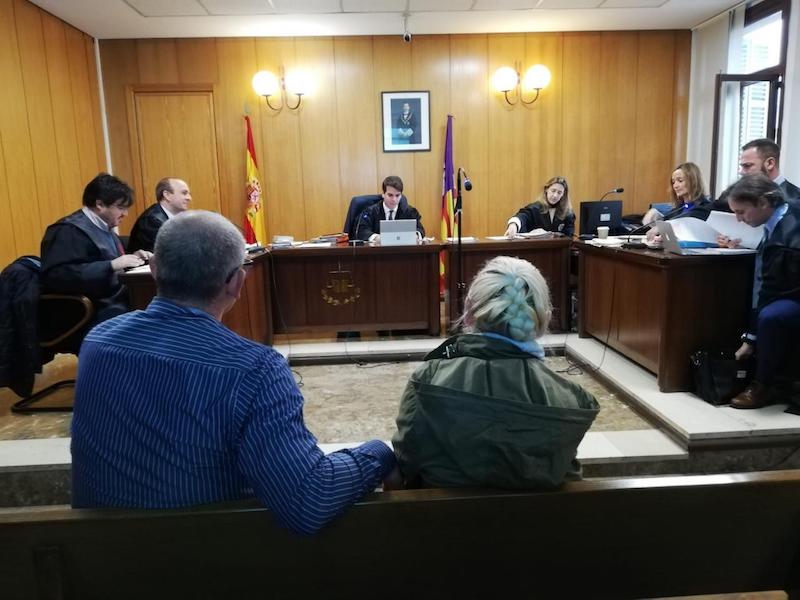 The defendant in Palma Court alongside her husband. Credit: Europa Press.

THE trial is underway for the woman who knocked down and killed a 15-year-old girl in Sa Rapita in 2018.
Assisted by a Polish interpreter, the 46-year-old woman told Palma Court on Tuesday (November 12) that she had not been offered the services of an interpreter following the fatal accident on June 24, 2018. In addition, she maintained that Campos Police had not informed her of her rights.
Paula Fornés was one of six teenagers who were walking home on a bike lane after enjoying the Sant Joan fiesta celebrations. The woman, who has been named as Renata G., lost control of a Skoda car which belonged to her husband and ran into the group, killing Paula Fornés instantly.
Renata G. left the scene but was followed by two witnesses who had seen what had happened and who subsequently took the car keys from her when she stopped to try and adjust the wing mirror of the vehicle.
Campos Police tested the woman for alcohol where she was found to be four times over the legal limit. A witness also told the court that the defendant “could almost not stand up” when they had approached her.
The impact received by Fornés was described by the coroner who carried out the autopsy to be “extremely violent” and that her death was virtually instantaneous.
Renata G. informed the court that she settled in Sa Rapita seven years ago and that she lost both of her parents in close succession. She suggested that these losses had caused her to become depressed and dependent on alcohol.
The defendant is charged with five crimes, including death by serious recklessness and reckless driving, since she tested positive for alcohol.
The prosecution is seeking the maximum four-year sentence for a death caused by drunk driving plus one year for false documentation as her Polish driving licence was fraudulent.
Relatives of Paula Fornés offered their testimony in court on Tuesday. Her father, Biel Fornés shared the pain that he has lived with since his daughter died, revealing that himself, his wife and his son have undergone psychological treatment and that he continues taking medication to deal with the grief.