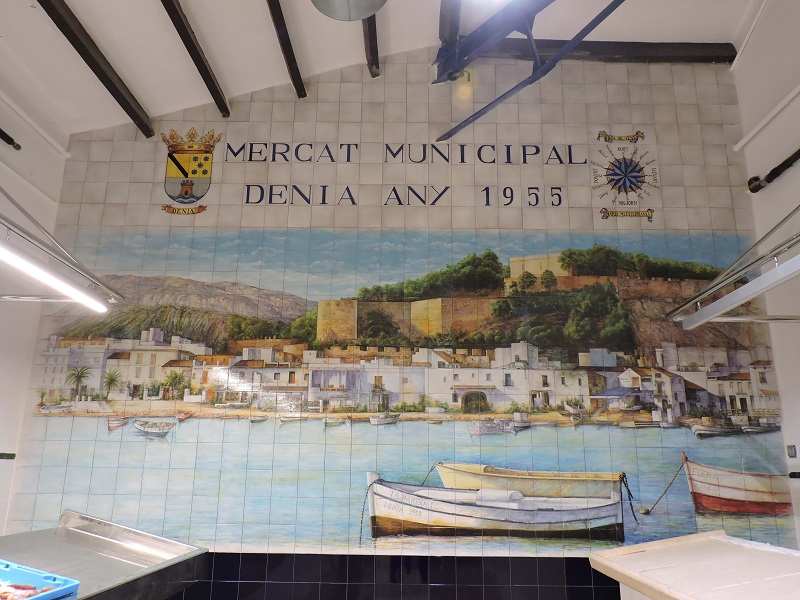 REFLECTION: The mural features the characteristic elements of Denia and its fishing and sailing traditions. CREDIT: Ayuntamiento de Denia

A BRAND new ceramic mural at the municipal market offers a fresh perspective of Denia.
The work by expert ceramic artist Jose Manuel Tos recreates a panoramic view of the town as seen from the sea, but as it was six decades ago, the era when the market first opened.
In the front part the mural shows the waters of the port and the traditional boats and behind the seafront and the castle, with the Montgo in the background.
The idea was to incorporate the characteristic elements of Denia and its fishing and sailing traditions to reflect the spirit of the municipality.
It also features the Town Hall shield next to the name of the market and the year of its inauguration, and in the upper right-hand corner there is the rose of the winds, an important symbol of navigation.
Jose Manuel, who trained at the Manises School, used 829 painted tiles for the six-metre wide and 5.6-metre tall mural. It took four months to create and then four “complicated” days to put it in place, the artist said, explaining that if a piece had broken it would have paralysed the whole installation process until he had made a new, replace piece.
The idea of a decorative mural was an initiative which began with the previous Markets councillor, Javier Scotto, with current councillor Sandra Gertrudix continuing with the project until it became a reality.
Rather than simply a sea of while tiles at the market, Scotto envisaged a piece which would combine functionality with “the improvement of the building’s heritage, cultural wealth and embellishment, as well as reflecting that Denia market is also a fish market.”
The current councillor described the mural as “a window which stands out for anyone who wants to contemplate what remains imprinted in the eyes of sailors: Denia port, its castle and the omnipresent Montgo, and without any doubt it is a very special piece with makes the municipal market a space for shopping, mixing with each other and enjoying.”