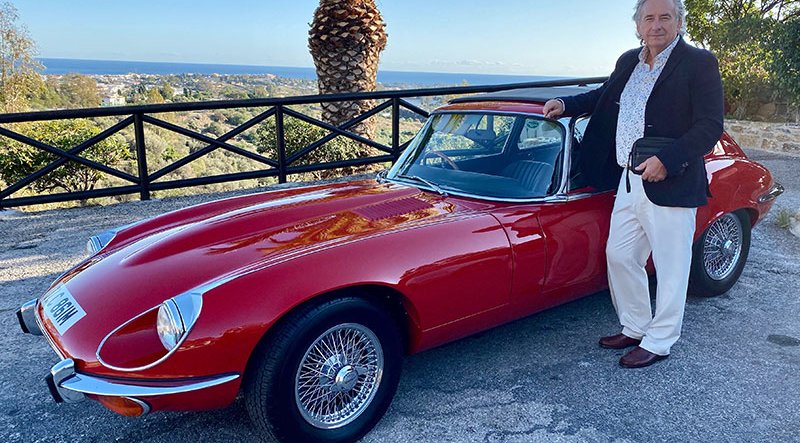 FOR those of us living here in beautiful Spain its been a marvellous summer that, until recently, has just gone on and on!  However, there have been a few signs recently that maybe the season is changing and with it the weather.  So, it was with some trepidation that members of the Classic Car Club of Andalucia prepared for their November classic car run last Saturday.

About 40 cars gathered at Venta El Tunel for the traditional 10.00am breakfast where there was just a little chill in the air but nothing too serious.  Venta El Tunel incidentally is just outside Malaga on the old Granada road near the Pantano.

The route for the day was to head up towards the Torcal where the altitude could bring bad weather.  The Club had last been here four or five years ago when, in April, there was snow falling during a serving of some chilled Fino before heading to lunch!

Today wouldn’t be quite so bad but crews were, at this stage, not to know that!

The registration and signing-on process was handled with great aplomb by regular helpers Angela Sharp and Marilyn MacPherson whilst members enjoyed the social intercourse that goes with a bacon sarni and a cup of hot coffee!

Some new members, Carole and David Binder had arrived, perhaps wondering what it was exactly that they were getting in to, and some members that had been away for some time were returning to reacquaint themselves with the Club, Peter and Sue Cross in their Jaguar XKR and Pieter and Kay Van de Lustgraaf in their lovely 1960’s Triumph TR250 were welcomed back after a long summer away travelling.

It was good to see a Dutch contingent, Danny Grietens and Arnie Hille, bring some gorgeous American muscle machinery in the form of C6 and C7 ZR Corvettes which made quite a contrast to some of the regular and perhaps more ‘conventional’ Classics!

Also back were Carl and Maria Cullimore, but their lovely red 1970’s Triumph TR6 had developed an electrical malaise that morning.  Rather than miss the fun, they brought Maria’s shopping Seat so that they could still participate.

Life members Konrad and Judi Thomas had come over from Blighty especially to join in the fun and so had to settle for a hire car but no-one minded that.

From Sweden came Jan Alvemark in his late father’s beautiful Jaguar XJ-8 which is always so graceful and can carry four people in comfort as it usually does!

The writer and CCCA Club Presidente, Ian Giles, was navigated for the day by Marilyn MacPherson. Her husband, Malcolm, had passed away three years ago leaving behind a Jaguar E-Type and a 1990’s BMW 840. Neither car had been used for some 15 or more years, so Ian has had both of these cars completely restored over the past two years and was delighted to take Marilyn, herself now a regular CCCA member, along in the BMW 840i that performed faultlessly and was thoroughly enjoyed by them both. The stunning, red Jaguar E-Type is also now ready and will be out on future CCCA events.

At 11.00am, after a short drivers’ briefing, cars headed along the fabulous old road towards Casabermeja where, at several points, there are amazing views of both the Mediterranean and the Sierra Nevada mountains simultaneously.

From Casabermeja the route headed towards Villanueva de la Concepción where the big climb to the top of the Torcal began.  Fortunately, although the air was indeed quite a bit cooler than at the coast, there was no snow and the sun was still shining! The reward was stunning topography and terrific views of the massive rock faces that dominate and dwarf the local countryside.

Just before Antequera the route turned off left to skirt the northern part of the Torcal and then a fast run down to Valle de Abdalajis where a welcome coffee stop had been arranged. Or, mostly for the navigators, a beer stop!

The Giles / MacPherson BMW 840 had kept company with the very new and very fast BMW M850i of John and Angie Lane and it was good to see both the cars together and parked together at the coffee stop.

From coffee, the route was fairly simple and passed by Los Caballos near  Pizarra and then through Alora, passing the old castle, before joining the main A-357 and taking the new road to by-pass VillaFranco del Guadalhorce and head in to Coin.

There is a quite marvellous and largely undiscovered restaurant in Coin called La Bohemia. It has been there for many years and is still run by the same family.  It provides outstanding food that is far and away different to what most expect from Coin and was very much appreciated by all the CCCA members and their guests. Cava and canapés were served to thirsty crews in the Cortijo on arrival and a marvellous lunch was then served.

It had been a super day, a stunning route with easy driving and, perhaps more important, easy navigation. To finish this with a spectacular lunch was a fitting end and thanks were given to the organisers, Ian and Carol Giles, for making it such a great day. They even kept the good weather…!!

Next events for the CCCA are the Clubnight and Christmas Party on December 3 and then a Christmas Special Car run on Saturday, December 7.

I also hope to participate in, and report on, the Jaguar (JEC) run later in November.

That’s it until our next issue.