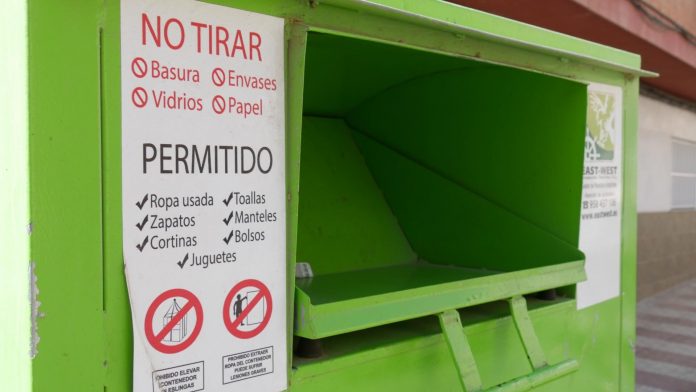 RECYCLING unwanted clothes, shoes and general textiles like towels and sheets is a growing trend in Almeria.
The Sector II Waste Consortium reported it collected 46,130 kilos of items deposited in the 92 designated skips located in the 48 municipalities in which it operates over the first half of the year. This represented a 6.6 per cent increase on the 43,266 kilos collected last year.
The consortium attributed the growth in volume to two factors. First simply because there are now more clothes recycling skips, but also because there is a greater public awareness about the importance of recycling in general thanks to different environmental campaigns.
The three provincial municipalities with the top clothes, shoes and textile recycling record in the first half of the year are Huercal de Almeria, with 14,884 kilos, followed by Viator on 4,178 and Carboneras with 3,516.
The Consortium also praised residents in several other municipalities for the total amount they recycled despite having relatively small populations, including Rioja, with 947 kilos, Lubrin with 668, and Alba, where just under 589 kilos were deposited over the six months.
“These figures confirm the consortium’s high level of commitment, which strives to increase the containers provided and to carry out awareness-raising campaigns, but also, more than anything, the commitment of residents to the great challenge which we currently face: respecting and looking after the environment and recycling”, commented consortium president Ismael Torres.
He said the challenge was one on which “we have to act urgently, responsibly and efficiently.”