Sport:Russian Promoters are “Confident Race will go ahead” 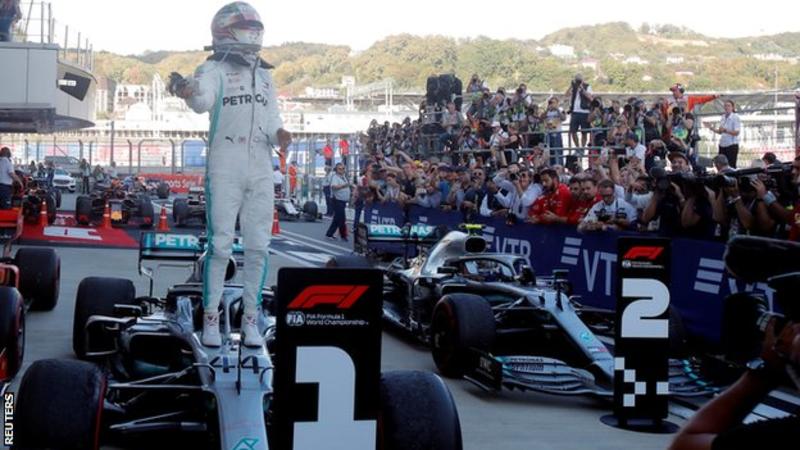 The promoters of the Russian Grand Prix say they are “confident” the race will go ahead despite Russia’s four-year ban from all major sporting events.

The World Anti-Doping Agency (Wada) imposed the ban on Monday following the Russian doping scandal. It means the Russia flag and anthem will not be allowed at events such as the Tokyo 2020 Olympics and Paralympics and football’s 2022 World Cup in Qatar. Promoters Rosgonki say it would be “legally and technically impossible” to move the race. “The contract for holding the Russian round of the Formula 1 World Championship was signed in 2010, long before the events investigated by Wada, and runs until 2025,” a Rosgonki statement said. The 2020 Russian Grand Prix is due to take place in Sochi on 27 September.

“Confident it will be held”

“We are confident that the Formula 1 Russian Grand Prix will be held in 2020 and in the following years and invite everyone to Sochi. The ticket sales are in full swing. A spokesman for F1 reiterated the comments of the Russian Grand Prix’s promoters, adding: “We will monitor the situation to see if there is an appeal and what would be its outcome”, Formula 1’s governing body, the FIA, is International Olympic Committee-recognised and classified by Wada as a code signatory. The four-year ban on Russia holding or participating in major international sporting events puts Formula 1 in a difficult position. The FIA, F1’s governing body, is a Wada signatory and it certainly meets the definition of “major event organisation” as the ruling body of any international sporting event.

The ban contains a “Caveat”

But F1 has found some wriggle room in one of the clauses of the ban, which contains a caveat. It states that where a right to host an event has already been awarded – as is the case with the Russian Grand Prix – a Wada signatory “must withdraw that right and re-assign the event to another country, unless it is legally or practically impossible to do so”.F1 says it has an ongoing legally binding contract for the Russian Grand Prix to be held in Sochi, which it is not possible to break or modify. The situation is further complicated by the fact that the contract for the race is with F1 – which, as a commercial organisation and the promoter of the sport, is not a Wada signatory – but the race is part of a championship run by the FIA, which is. The Russian Grand Prix is a pet project of President Vladimir Putin, who has attended every one since its inception in 2014, and the contract makes it one of the most lucrative races for F1. In the circumstances, the chances of the race being called off seem slim – despite Russia’s ban.