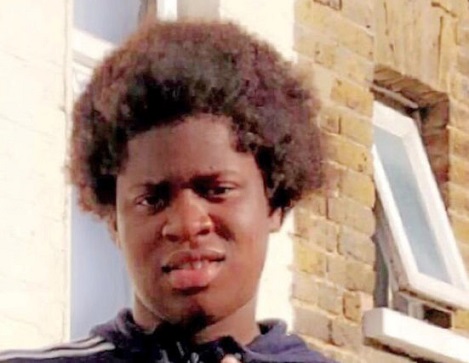 Amara Toure, 18, was stabbed repeatedly outside a home in Walworth

Amara Toure, 18, was stabbed repeatedly outside a home in Walworth, south-east London, in the early hours of Sunday June 30.

Jurors heard that Paulinho Paulo was out to avenge the murder of his friend, Noore Salad, 22, who was shot and stabbed in Newham, east London, in April. He only targeted Mr Toure because of his perceived association with a group the defendant blamed for the killing. Following a trial at the Old Bailey, Paulo, 20, of Manor Park, and Dullah Abdullah, 21, of Ilford, were found guilty of murder by a majority.

Their getaway driver, Sultan Chaudhry, 20, of East Ham, east London, had denied murder but pleaded guilty to manslaughter during the trial. This was accepted.

Prosecutor Anthony Orchard QC had told how Mr Toure, from Manor Park, had been chased into Sutherland Walk by Paulo. Paulo was captured on CCTV gesturing to Chaudhry and Abdullah to follow in a blue Ford Fusion car. Abdullah then joined the chase and blocked Mr Toure outside a house in Sutherland Walk, the court heard.

Mr Orchard told jurors: “CCTV from a doorbell camera opposite shows Paulo stab Amara Toure repeatedly over a period of about 45 seconds. “ Abdullah also struck Amara Toure on occasions. Throughout the attack Amara Toure tried to defend himself.” Afterwards, Abdullah and Paulo were driven off in Chaudhry’s car, the court heard.

Mr Toure, who was unarmed, staggered back towards Walworth Road where he was picked up by a passing car. He was taken to St Thomas’ Hospital, where he was found collapsed outside accident and emergency. He died later that morning. Paulo admitted killing Mr Toure but denied murder on the basis that he lost control.

Abdullah admitted being at the scene but blamed Paulo for the violence.

Mr Toure’s family wept in court as the jury delivered guilty verdicts after deliberating for more than 12 hours. The defendants were remanded into custody to be sentenced on a date to be fixed in the New Year.

Detective Chief Inspector John Masse, of Scotland Yard, said: “Paulo, Adbullah and Chaudhry have violent and criminal backgrounds and they will now pay the price for their actions.

“A family is now left without a son and they will have to live the rest of their lives with this loss. “I would like to pay particular tribute to the courage and dignity Amara’s mother has shown throughout this incredibly traumatic time and hope that today’s verdict provides a sense of justice and some degree of closure.

“I and the investigating team are enormously grateful for the co-operation and assistance of the local community as well as the officers who responded to the incident and their management of the immediate aftermath.