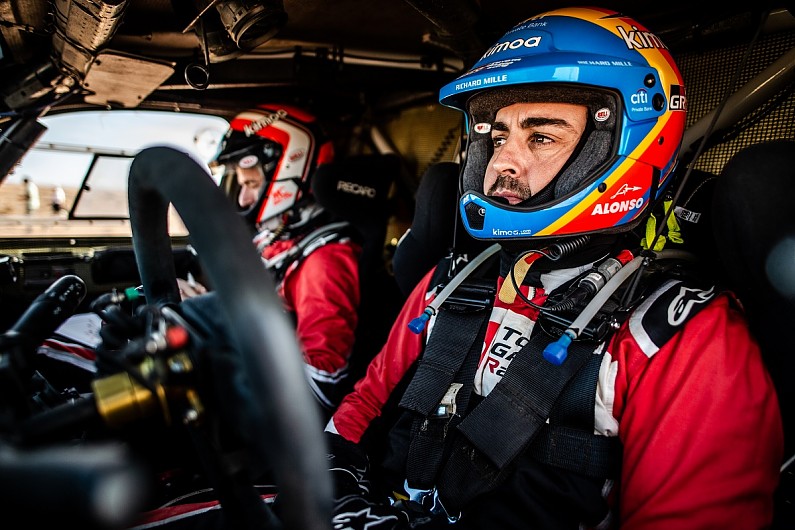 Spain’s greatest racing driver Fernando Alonso learned the hard way as he set about his introduction to the Dakar Rally on Monday, when his Toyota Hilux tore a wheel off as he hit a ditch caused by sand blinding from rival cars, Alonso had no vision at all as he ripped off the wheel and causing bad damage to his car.

Spain’s double Formula 1 world champion started Monday’s second stage 11th overall and was close to the front running pace on the Al Wajh – Neom test when he “hit a hole” less than halfway through the 228-mile stage setting him back down the positions.

Alonso and his team mate Como turned mechanic and fixed up the car themselves to save time using parts they were carrying in the car rather than using the assistance truck that can be provided in the dessert, this saved them valuable time, although it cost them two hours, which could have been a lot worse for the Spanish hero.

The country of Spain are routing for their sporting hero to get back on the pace and catch up with the leaders and Alonso’s vast experience on car repairs from his formula 1 day’s where he used to study rather more than other drivers. That experience came to good use yesterday saving vital time.

Spain’s Alonso, is attempting to be the first driver from F1 to win the Dakkar rally and bring   back the winning trophy to Spain.

As he does so Spaniards are glued to their TV sets across Spain willing him on, with many bars across Spain switching off football in preference for their racing hero.

This is not the first different test for Fernando, he’s also won the iconic Le Mans title as well as his two times world championships in F1, although he has twice attempted the gruelling Indy 500 to no success yet, although that remains forefront of his mind. The first attempt as a rookie saw him in great position to take the flag and the famous bottle of milk in Indianapolis but engine failure on the final laps put paid to that, whilst in 2019 his McLaren team set the car up wrongly against his mechanical wealth of knowledge and he failed to qualify for the “big one”

Paul Mohamed a former  “lug nut” ( mechanic) of Alonso as known in America told the Euro Weekly News ”  It’s early stages yet still in this challenge for Fernando – his experience and understanding of car rebuilds certainty made a huge difference, most drivers would have relied on the assistance truck costing them at least 4 to 5 hours, but he cut that time”

” I still wouldn’t write him off, he has the heart of a lion”